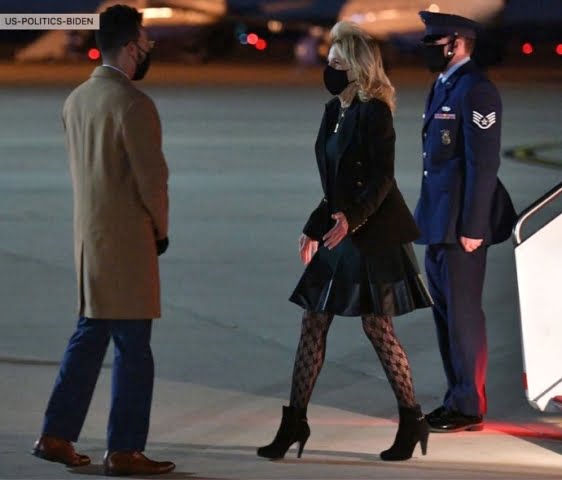 Google offers over 999+ adjectives to describe an older or old woman. Astonishing. And they are uniformly pejorative:

And if that’s not bad enough, you can also resort to:

‘withered and bitter’; ’almost well-dressed’; ‘unnaturally lusty’; ‘crazy and uncanny’ ; ‘entirely uninteresting’, are some of the terms. Even the word ‘Boomer’ has become slurred and layered with connotations of greed and selfishness.

When Dr.Biden, the First Lady of the United States appeared in patterned tights and boots, she was instantly condemned in the media and on social media. Twitter users hurled sexist and ageist jokes at the 69-year-old educator. Numerous tweets called her names like “hag,” “hooker”, “trash and “witch”. One tweet advised that ” For an additional $29.99 Jill Biden could have accessorized her Halloween costume with the optional broom.”

It worth noting that during the U.S. election campaign, Joe Biden was called “Sleepy Joe” as reference to his age. But when Hillary Clinton ran for president, she was pilloried as a “crone” capable of witchcraft.

In a society that values women primarily for their youthful beauty, sexual and reproductive powers, the more we age, the more our currency as women is devalued.

And it is reflected in the language.

Mary Beard, who is Professor of Classics at the University of Cambridge and the presenter of BBC Two’s Inside Culture said she is frequently branded a witch in an attempt to discredit her and older women generally. “Throughout many periods of history in the West there has been a real worry about what you do with women who are past their childbearing years. As I can confirm, women with long grey hair can make people anxious.”

They denote weakness, ugliness, helplessness and even evil.

They constitute a massive put down.

But does it matter? What’s in a name you may ask?

Well, nomenclature and honorific reflect respect, status and even power.

Or the lack thereof.

They are fundamentally connected to value.

Or the lack thereof.

It is important to point out the sharp dichotomy between Indigenous and non-Indigenous Australians regarding appellations for older women. Indigenous older people, women and men, are collectively called ‘Elders’ and individually the women are addressed as ‘Aunty’. These are terms that denote respect. They reflect the status and position of authority that older women hold in First Nations society. They are valued as leaders and repositories of traditional stories, culture and law spanning 60,000 years. They are so valued that during Covid19, Indigenous communities made protection of their Elders their utmost priority. And they were very successful.

Unlike traditional societies, we still haven’t come up with a respectful and value-enhanced term to describe older women. This paucity of positive appellations puts me in a real quandary whenever I write articles about women over 50. I have to use either the term ‘older women’, or try to remove value judgments by using the phrase ‘ women over 50’.  I wrote an article using the term ‘ We, the Matriarchs…’ but most women do not identify themselves as matriarchs.

What we call people reflects the value society assigns to them

The feminists of the 1960s understood the importance of nomenclature and honorific. That’s why one of the first things they did was change Mrs. and Miss to Ms. It was to give women a value and a way of being addressed independent of their relationship to a man.

What we call people reflects the value society assigns to them. So our lack of respectful and value-enhanced terms to describe older women exactly reflects the negativity and discrimination towards them in society and that is translated into policy and action.

The widespread and well-documented age discrimination in the Australian workforce has directly led to women over 50 constituting the majority of those living below the poverty line. During Covid19, women over 50 were the first to lose their jobs and are the least likely ever to be re-employed despite their qualifications and experience. There are presently over 400,000 women over 45 at risk of homelessness in Australia.

Globally, prejudice and discrimination are now threatening the financial security and the very survival of so many older women in countries around the world.

But most governments barely acknowledge the problem, let alone develop policies to deal with it. And what is extraordinary, is that we are not speaking about a small minority group. We are speaking about a significant demographic in Australia, the US, England and other countries. By 2030, one in three Australians will be over 55. The majority will be women.

Perhaps the problem is that so few countries are led by women over 50. Here too we can trace this back to attitudes about older women. Men on the public stage gain gravitas and authority as they age, women are considered enfeebled and inappropriate for the public stage.

It is encouraging therefore to see women over 50 becoming more visible in international forums as strong leadership figures – the great Angela Merkel has just retired, but we see Kamala Harris, Janet Yellin, Nancy Pelosi in the U.S., Ursula von der Leyen and Christine Lagarde in the EU, Christine Tsai Ing-wen in Taiwan. And Ngozi Okonjo-Iweala of Nigeria, the Director General of the World Trade Organization.

But this does not change the fact that the major social crisis now affecting older women has remained, like the women themselves, largely invisible.

What are we going to do about it?