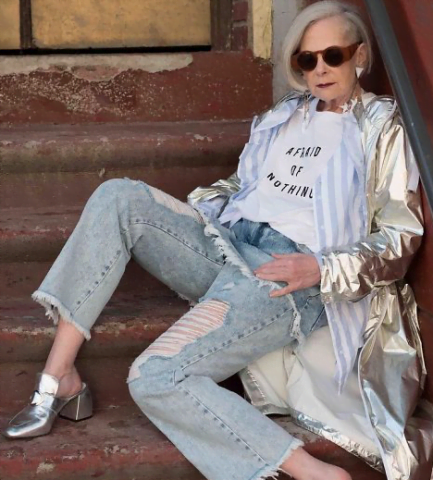 We, the Matriarchs… are the first generation in history of older, highly educated women to number in the tens of millions.

We are the first ever generation of older women who have spent decades in the workforce in professions and skilled employment, and not in the sweatshops and the fields.

We are the first ever generation of older women who have accumulated independent wealth and economic clout, despite discriminatory wage practices.

And we are the first ever generation of older women who can expect to live into their 90s.

But now we are entering the age of retirement.

What next? What does society expect of us?

Well, nothing really. We are the most invisible segment of the population. If they see us at all we are only seen as stereotypes – kindly grannies, old hags, frail spinsters or old biddies selfishly occupying homes that could better be used by young families. I went to a luncheon for International Women’s Day attended by over 400 women. So little was expected of this large congregation of women that the only sponsor was a funeral home.

The Last Frontier of Feminism

Over the last decades, feminists have addressed the issues in the life cycles of girls and women – contraception, abortion, education and workplace equality, child-care etc . But only now are we feminists of the ‘60s hitting our own 60s. Only now are we ourselves facing the problems of older women and experiencing the magnitude of the discrimination.

Women ageing is the last frontier of feminism.

Older women are seen as a national liability, whereas in fact, we are a national asset.

We are actually the fastest growing sector of the Australian population, we have significant spending power as a group, and remarkably we are a key driving force in the creation of start-up enterprises. More older women are creating new businesses in the US, England and Australia than cool young males.

We are society’s unlikely innovators. Creating new enterprises, re-inventing ourselves and re-defining how women age.

And we have had to take matters into our own hands and find our own way because there are no good roadmaps for women ageing in contemporary society. Society offers us few options. Thirty years is a long time to babysit the grandchildren, garden or play golf.

Instead, we see the coming years as a considerable period in our working lives uninterrupted by child bearing and rearing. Years in which to deploy a lifetime of experience and expertise. We enjoy using our highly developed talents and skills, but few employers are willing to give us work.

“Like kryptonite to Superman”, ageism is a huge barrier to female employment, notes the incomparable Kathy Lette.

Undaunted, many women over 50 have taken to the internet in mass numbers and are setting up our own enterprises. Astonishingly, baby boomers are expected to contribute an additional $11.9 billion to Australia’s GDP, specifically by starting online businesses. The numbers of male and female entrepreneurs are roughly equal at present, but Dr. Alex Maritz, Professor of Entrepreneurship LaTrobe University predicts a surge in women senior entrepreneurs.

Older women continue to work, not only because we can and want to, but also out of necessity. We all know how precarious the situation is for many older women, particularly those in their sixties and older with limited or non-existent incomes.

We were the generation that worked decades before super was introduced. Then there are the cumulative effects of a lifetime of discrimination: lower pay than men because women were not “ the main breadwinner”; part-time work; lower paid professions and the exclusion from the top professional and business levels. Add to this, the years out of the workforce to have children and look after family members. Re-entry to the workforce then becoming either impossible or with reduced pay.

Since statistically, women live longer than men and only 15% will have their husband alive when they die, most women will lose the couples’ pension. Living on one pension with the government relentlessly chipping away at it, is forcing women to sell their homes.

With pensions cut and no jobs available for older women, not surprisingly, in the past five years, there has been a 44% increase in older women becoming homeless.

I am reminded of a film I saw about a Japanese man taking his ageing mother on his back up a mountain to leave her there to die. That was a traditional way of dealing with ageing women.

We must speak out against our government’s policy of impoverishing older women.

But we must not frame the discussion around older women solely in terms of helplessness and national liability.

We must provide opportunities for older women to earn an income in dignity and speak out against ageism in employment.

Not all women want to open up their own businesses, but the many that do must be given the legislative support, funding and incentives provided to the start-ups of younger people.

Australia has an enormous reserve of skilled womanpower that we cannot afford to waste.

And we older women, don’t want to live this part of our lives in the straitjacket of society’s expectations.

That is the mandate of WomanGoingPlaces. To showcase the older women of Oz in all our rich variety, wisdom, strength and accomplishments.

WOMEN OVER 50 – what shall we call ourselves?

Now We Know Who To Blame
Scroll to top
Posting....