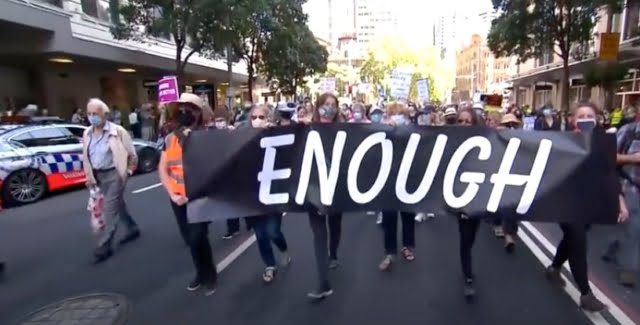 The March4Justice movement has achieved something remarkable for Australian women. It has transformed decades of private suffering into mass solidarity.

For the first time, tens of thousands of women ended their silence about sexual abuse and injustice.

The March4Justice protests that saw 110,000 people in 42 marches around the nation have not dissipated into silence.

This is because Australian women have fundamentally changed their way of thinking.

Grace Tame, Brittany Higgins and Katherine Thornton together ignited this explosion of rage. Their courage set off a spontaneous combustion of deep reserves of trauma, shame and frustration buried beneath silence. Women have had enough.

These events drove home to women that it’s not an individual problem, but a society-wide bias against women seeking justice and equality. The system is rigged against women and girls.

The misogyny is institutionalised

The biggest shock to most Australians was learning that Federal Parliament is one of the most unsafe workplaces for women in the country. Harassment, abuse and even sex crimes against women have not exacted a toll on anyone but the women who have been abused.

“ Not to worry. The woman is dead and the law will protect” Attorney-General Christian Porter regarding the alleged rape.

Statistically this is undeniable. Ninety percent of sexual assault cases do not end up in court. The chances of a woman finding justice are minuscule compared to the reality that she will be re-traumatized and left with her reputation shredded.

The revelations about Katherine Thornton were followed very carefully by women. They understood how the years of grief and and trauma had de-railed her life and potential for a remarkable career. They read that when she went to make a complaint to the police, she was forced to wait months for them to take a sworn statement from her. They never did. She killed herself. All calls for an independent investigative process have been rebuffed by the Government.

The identification of women with Kate, Brittany and Grace springs from shared experience. It’s about women acknowledging that as individual women they are powerless against a system that is built on their silence. It is a system that has left them with no option but silence. They won’t be believed if they speak up and they will most probably be slut shamed. Brittany was called “a lying cow” by one of the highest officers in the land, the Defence Minister of Australia.

The word of women has been discredited in order to protect the status and reputations of men. And that is why rapists are so confident they can successfully silence their victims.

But women are no longer prepared to remain silent and that’s what makes things so different now.

Two key factors have prevented the rage ignited by Grace, Brittany and Kate from being muffled.

First, the number of leading women journalists determined to prevent a cover-up. A team of women journalists across different networks has emerged in the forefront. It is perhaps the most striking proof that when women are present, the conversation changes dramatically. Without these highly experienced women journalists, unquestionably, the whole issue would have been dropped out of public discourse. Louise Milligan and Laura Tingle have continued to speak out despite the ABC having its funding slashed and facing litigation. Lisa Wilkinson, Samantha Maiden, Katherine Murphy, Tracy Grimshaw, Amy Remeikis and others have done exceptional work.

The second key factor stopping the rage from being quashed is social media.

Well may PM Morrison rail against social media. It is contributing to his demise. But it has nothing to do with its  ‘evil influences’ as he calls them.

Social media is a threat because it has removed the near monopoly the media oligarchs and the Government hold over public information and public discourse. This mutually beneficial connection between them is being challenged by a grass roots movement. Inordinate power is being democratised.

Social media is giving individual, powerless women a voice. For most, it is the first time they have ever mentioned the sexual assault they had endured. As one woman came forward for the first time, another woman and another took courage and spoke up until it became a wildfire.

Women posted how old they were when they were first assaulted and the circumstances. The posts are horrifying.

It has happened to women at all ages, from the time they were toddlers to when they were in aged care.

Often it happened to three generations in the same families.

It happened in their homes, schools, the street, their workplace – everywhere. It is perpetrated by their closest family members, neighbours, friends, teachers, co-workers, employers – every type of relationship. And it happens across all socio-economic demographics, backgrounds and religions.

It has always been like this. But what has changed now, is that many women have had enough of keeping it secret. They’ve had a lifetime of trauma and stigma, while the perpetrator in most cases walks away with impunity.

Despite their fear it will damage their reputations, they are now speaking out publicly, no longer accepting victim blaming.

And they have easy access to a national and international platform.

Without social media the March4Justice on March 15th could never have happened. On February 25, Janine Hendry was exploring the idea of having women link hands around the perimeter of Parliament House to protest against gendered violence, discrimination and inequality. She tweeted asking: “I need someone to tell me if this is possible. I then also need someone to estimate the distance and how many women we would need?”

And from that it rapidly morphed through Twitter and Facebook, with minimal organization and funding, into simultaneous national-wide marches.

Grace Tame exhorted women to make noise. And that’s exactly what they are doing. The momentum continues to grow. We have not yet seen the full repercussions of this movement.

999 Ways to Describe an Older Woman