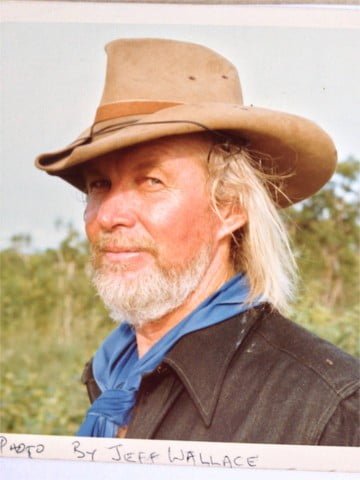 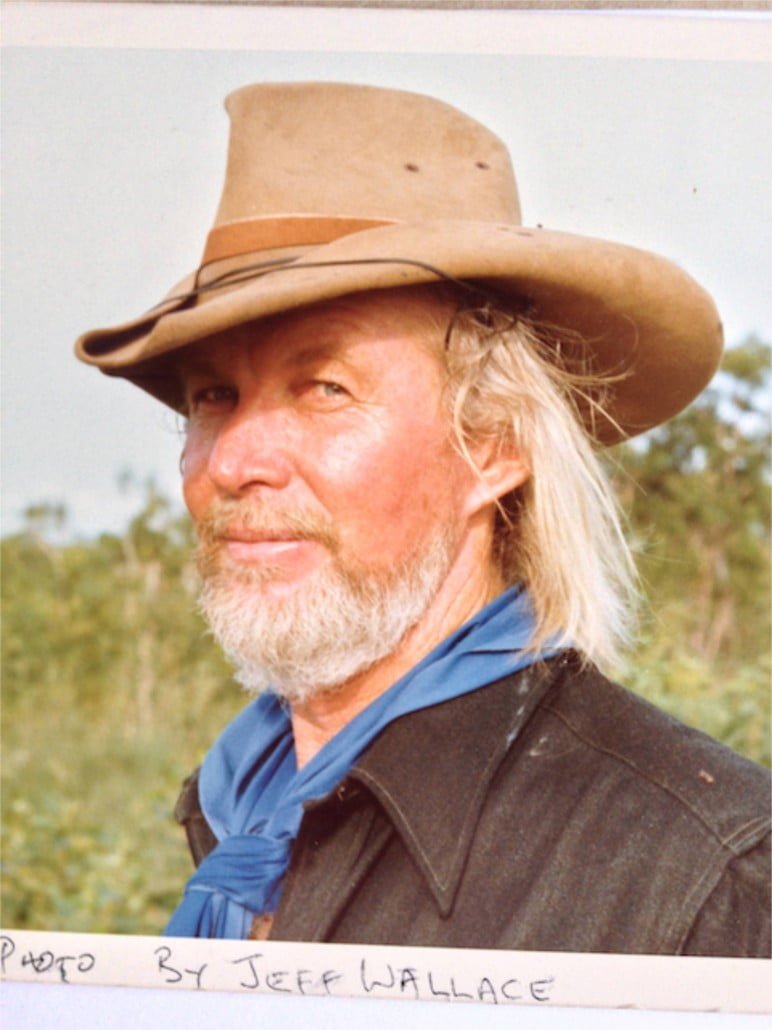 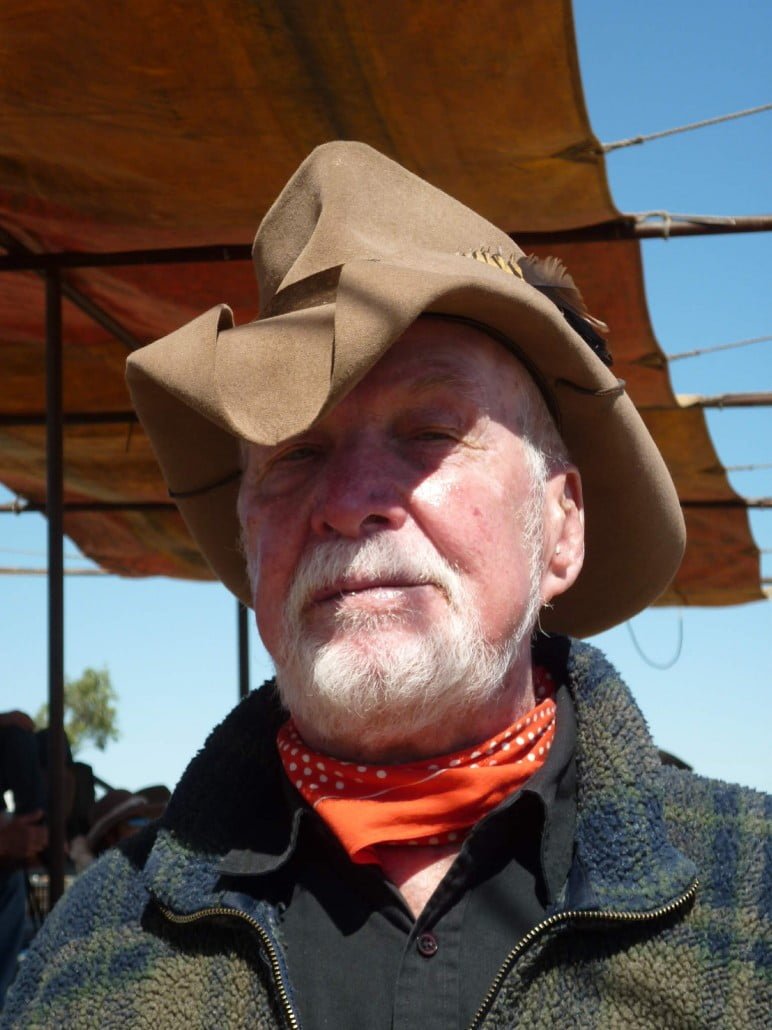 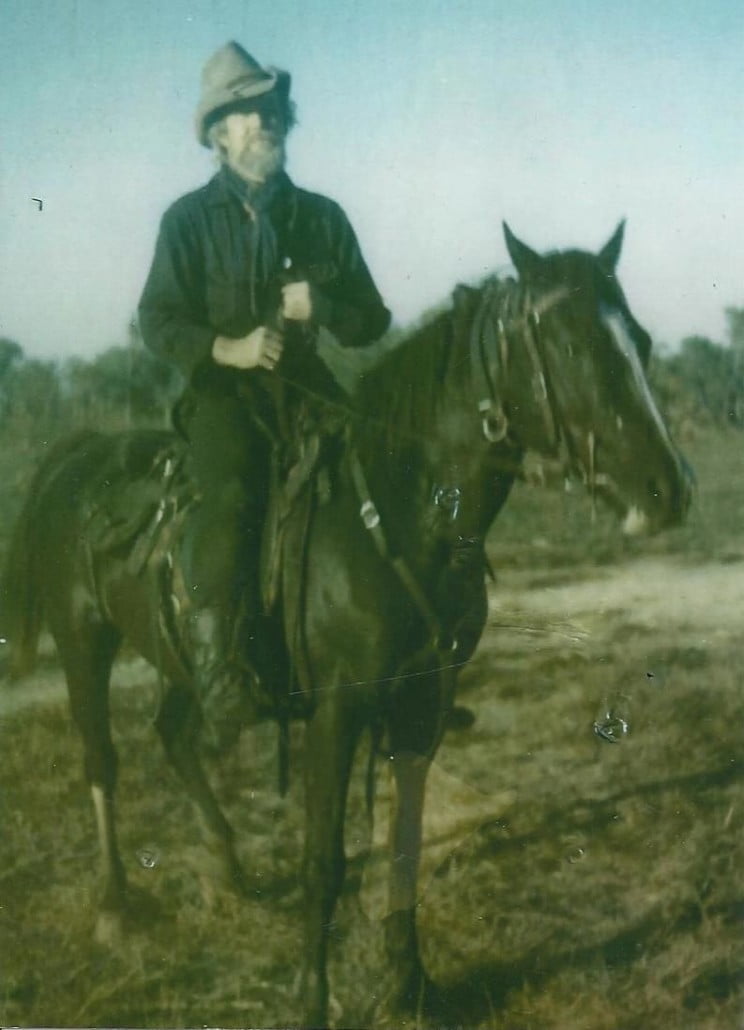 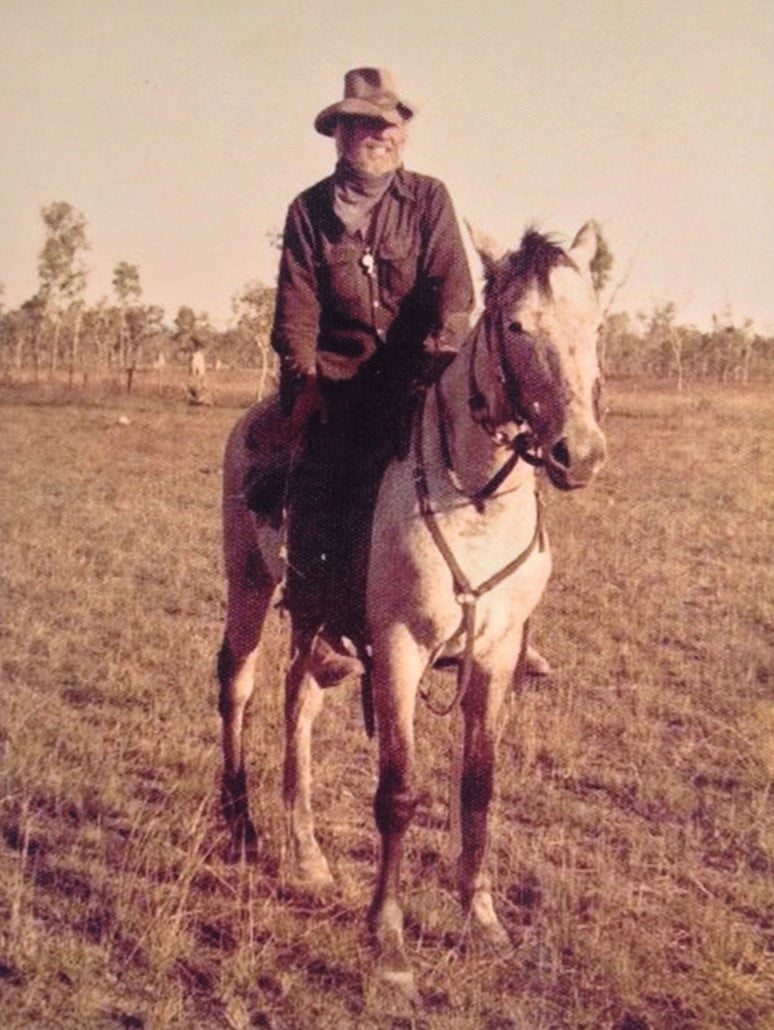 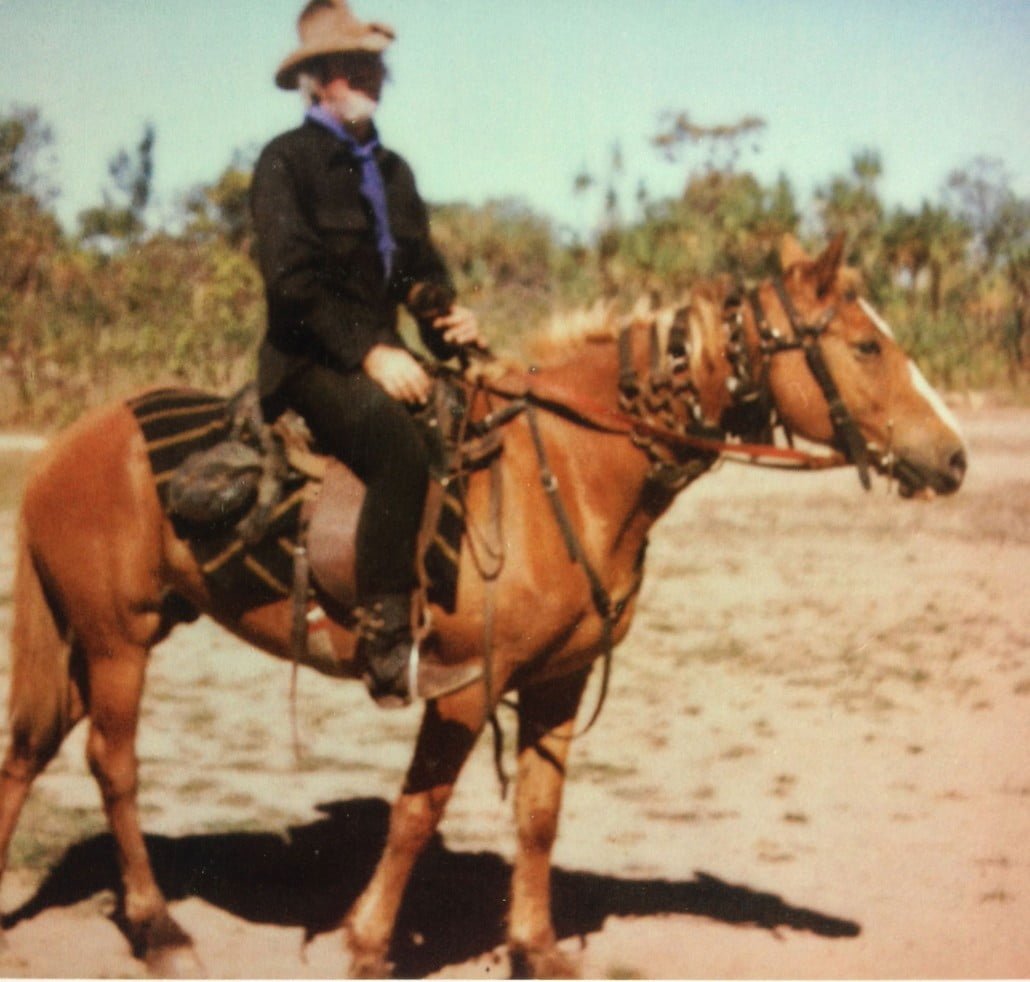 The drover, stockman or ‘ringer’ and he is called, is an iconic figure in Australia. He has been immortalized in poetry, songs, folklore, paintings and literature. But there are few real drovers and stockmen left. Nowadays, these men of the outback have been replaced with road trains and helicopters.

Luke McCall, who passed away on 9th November 2018 aged 88, was one of the last iconic drovers. For over half a century he crossed the vast length and breadth of Australia with thousands of head of cattle and horses. He loved the life and the stock and never saw it as a life of extreme physical hardship, danger and isolation. In this profile she has written for WomanGoingPlaces, Patricia McPherson describes her soulmate and friend of fifty years, Luke McCall as  ” a legendary stockman whose name stands high right across the north of Australia.”  Editor’s note

I met Luke on the airstrip the day he arrived at Fitzroy Crossing in the Western Australian Kimberley in 1967. I was working as an itinerant nurse for the Australian Inland Mission and was there to put an esky of medical specimens on the mail plane when this tall handsome man dressed entirely in black came down the steps nonchalantly carrying his saddle over his shoulder, much as a city guy would carry his sports coat.  I was a bit blown away I can tell you – he was a very romantic figure and I have fond memories of having many suppers in his stock camp beside the campfire under a million stars and listening to the music of horse bells.

Luke McCall was born into a stock riding family at Nebo over the range from Mackay in Queensland in 1932. Aged 15 he threw his swag and saddle on the mail train and headed out west where he picked up a job as a ‘ringer’ (stockman) on Lorraine Station way up north in the Gulf on the Leichardt River.

For over half a century, Luke would live the life of a drover and stockman in the Australian outback. Droving meant spending each and every day in the saddle – often for nine months in a row. The work began at dawn and frequently there were night watches as well. No days off or spells.

The working life of a stockman was seasonal. It started at the beginning of the Dry season in early April when the horses were mustered and broken in, more than a hundred on most stations. The head stockman would then allocate freshly employed stockmen their ‘plant’ – usually 10-12 mustering horses, some camp-draft horses and a night horse or two.

When all was ready, the stockcamp consisting of about 8-12 ringers, a cook, a horse tailer and the head stockman would ride out, accompanied by their pack horses and horse plant. This departing cavalcade was always an exciting sight.

They worked to a schedule in that they had to have x number of bullocks ready at such and such a spot on such and such a date ready for transport to the meatworks. These mustering rounds lasted about 3 months. Stock was mustered one day and ‘processed’ the next. Calves were roped and pulled up to the bronco panels and branded, ear marked, castrated, mothered up and let loose. Bullocks were drafted into a separate mob and held, fed and watered  until such time as they were picked up by the overland drovers or, since the 1960s, road trains. At the end of each mustering round the stockcamp would go back to the station for a brief break which usually coincided with the local rodeo or race meeting. By the end of the third round in late October it was far too hot to work cattle so the ringers rolled their swags and went south for the Wet season.

This was Luke’s way of life on several Gulf country stations; Kamileroi, Norfolk, Coolullah and Gleeson to name a few.

Like most ringers he would take an occasional year off from the stockcamp to go overland droving. He made a number of droving trips from Camooweal to the Kimberley and back with the legendary packhorse drover Bruce Simpson with 1,500 head in hand.  These droving trips would cross 2000 kilometres of the harshest, hottest, most arid and most beautiful parts of Australia, from Western Australia to Queensland.

The droving life was almost sedentary compared to the thrills and spills of mustering wild cattle. It too started at first light when the mob slowly moved out along the stock route feeding all the way to ‘dinner camp’ where they were given a spell then a long drink of water and then moved out in late afternoon to settle down on good feed when it could be found.  The ringers, who had been in the saddle since dawn, took shifts in riding around the mob on night camp singing as they rode to settle the cattle.

There was always a risk that the mob could rush at night. In this case the night watch would be joined by the rest of the men who woken from their sleep, would grab their night horses which were always saddled and tethered nearby and ride to turn the lead back on itself to slow the mob down.

In the early 1970s, Luke was employed to set up a cattle station, Palumpa, 250 kilometres south-west of Darwin which was eventually to be run by the local aboriginal group. Starting from scratch this involved years of rough living camped on a waterhole until the homestead complex was eventually established. It involved catching and transporting wild bulls to the meat works for an initial cash flow and stocking the station with quieter cattle as well as horses. Luke made several trips to the Cloncurry horse sale where he would buy up to 100 horses at a time, dip them and truck them to Daly River, then drive them 120 kilometres to Palumpa single-handed. The ABC devoted a Big Country programme to the ‘Curry Sale’ which featured Luke.

This publicity was nothing compared to that which he received in 1977 when he rescued the man who was the real “Crocodile Dundee”. Rod Ansell had been stranded for eight weeks on the banks of the remote Fitzmaurice River after his fishing boat sank.  Ansell salvaged his two eight week-old bull terrier pups, a rifle, a knife and his swag and set up camp in the fork of a tree out of reach of giant saltwater crocodiles which threatened him and his pups. He shot those that attacked him.

Rod Ansell never counted on being rescued but Luke and his stockcamp made a once-in-a-lifetime visit to that area and found him.   When the story hit the press, Ansell was hailed a modern day Robinson Crusoe.  A book and a film To Fight the Wild followed. A subsequent Parkinson interview sparked the interest of Paul Hogan and led to the creation of Mick “Crocodile’ Dundee.

After his Palumpa years, Luke spent time working on Helen Springs and Wave Hill stations in the NT by which time stock work as he knew it was long gone and he was probably the last of the old time stockmen still standing. Jackeroos on quad bikes and helicopter mustering became the norm.

He retired in 1993 following a hip replacement and made a home for himself in Batlow in NSW. He turned his hand to writing a monograph, Before helicopters and road trains: What was expected of a stockman. It was printed by The Stockmen’s Hall of Fame in Longreach where it is still in print and remains a best seller. He has also written Stories from the Stockcamp which takes the point of view of stock that he has spent his life working with. In these stories, we meet a clean skin bull; Crooner the night horse; an outlaw bullock;  Ruadah a liver-coloured mule; Winnie a coaxer cow; Dove a breaking-in mare and Tarpot a bronco horse. As yet unpublished, these stories reveal his great feeling for and understanding of stock.

Each year Luke would look forward to the annual trip up north to the Drover’s Camp in Camooweal. He met up with old mates along the way from Wagga Wagga to Cloncurry where he was greeted with great affection by men he worked with and I dare say with great reverence by many whom he mentored when they were young. His name stands high right across the north – he is indeed a legendary stockman.

At one of these Drover’s Camps , a popular tribute was paid to Luke when Keith Douglas read out, in the best tradition of bush poetry, the poem he had written about Luke McCall:

Somewhere down near Brisbane
where too many people live
there’s an old retired drover
they don’t know who he is.
But up here on the northern runs
when your back’s against the wall
no better man you’d have beside you
than the legend Luke McCall.
From the Kimberley to the Curry
and all places north and south
he’s left his mark on many
they all know without a doubt
the man who’s dressed in black
a red bandana ‘round his neck.
When it comes to clever bushmen
he’s up there with the best.
You’ll never hear him boast
or talk about himself
he’d just as soon have a yarn
and leave that stuff to someone else.
For he’s been and done those things
back in those other days
when a man was judged on what he’d done
not on what he had to say.
He’s so humble and well mannered
shows respect to all he meets
a real man from a real land
though now unsteady on his feet.
The bush has been his playground
his family and his home
when it comes to living legends
he’s a class act all his own.
Each year he travels back
to that sleepy border town
to meet old drovers gathered there
to pass some yarns around.
He joins in conversations
about cattle, mounts and miles
the memory of a life well lived
gives him reason now to smile.
With water in the government tank
and grass out on the plain
and big mobs on the stock route
that we’ll never see again.
But always in my memory
these old men will walk tall
and up there with the best of them
is the legend Luke McCall.

Read Patricia’s post in Woman In…Outback Australia: Camooweal, Queensland about the annual Drover’s Camp Festival that she and Luke would drive 7,000 kilometres to attend each year on the border between Queensland and the Northern Territory. This camp takes place in August and is open for all to attend.

Patricia McPherson is a retired nurse from Victoria. She worked as a nurse for years with the Australian Inland Mission at Fitzroy Crossing in the Western Australian Kimberley region in the 1960s and  regularly travels to the outback which she considers her ‘heart country’.

Outback Australia in the Wet Season