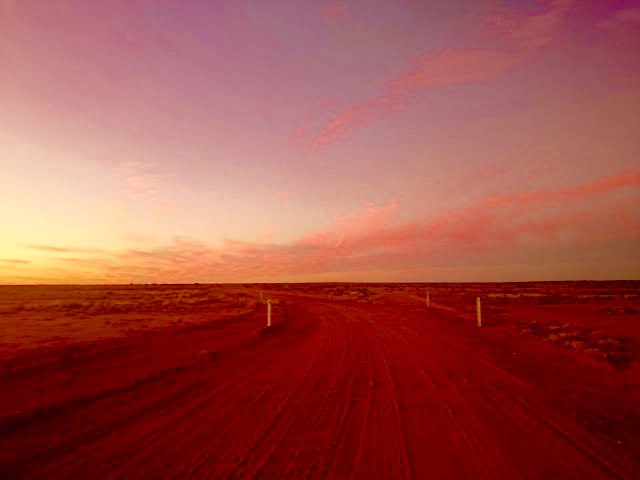 My daughter Genevieve and I drove 4000 kilometres from Port Augusta in South Australia, to Darwin in the Northern Territory, in two weeks. The direct route is just over 2,700 kilometres. But we wanted to see the outback.

Genevieve shares my love of the Australian outback, the remote deserts, the unique heat, the waterways and the people. After completing a year of work in the Pilbara region of Western Australia she was to begin a new position in Darwin. This meant she needed to bring her car from Western Australia to Darwin. She had a month before beginning her new position, so I volunteered to accompany her on the drive between Port Augusta and Darwin. With two weeks to cover the distance, we decided to meander our way north detouring to our hearts’ content.

We drove for 3-4 hours each day with lunch and morning tea stops.

In February the temperature sits on 40º all day, and only after sunset, begins a slow, nonchalant descent to 27º, reached around three or four in the morning. After dawn the sun marches back into the day with gusto and the temperature peaks by 9am remaining there for the rest of the day. Due to the heat, our pattern was to drive during the middle of the day taking advantage of the car’s  air-conditioning, and arrive at camp in the late afternoon or early evening, allowing time to set up the tent and cook. We planned activities such as walking for the early morning, and were back on the road mid to late morning.

Until now the Oodnadatta Track existed, for me, only through tales my father told me and stories in the books of my adolescence. It was a place remote and fearful, a desert highway for camels, telegraph linesmen and the legendary white Australians of cattle stations and homesteads; a place where the heat and dryness could kill.

Our journey along the Track started at William Creek. It wasn’t our intention to drive along the Oodnadatta, at least not as far as we did. It was only as my daughter and I drove further into remote South Australia that we grew more confident, and that the Track began to lose the unpredictable power my imagination had given it. 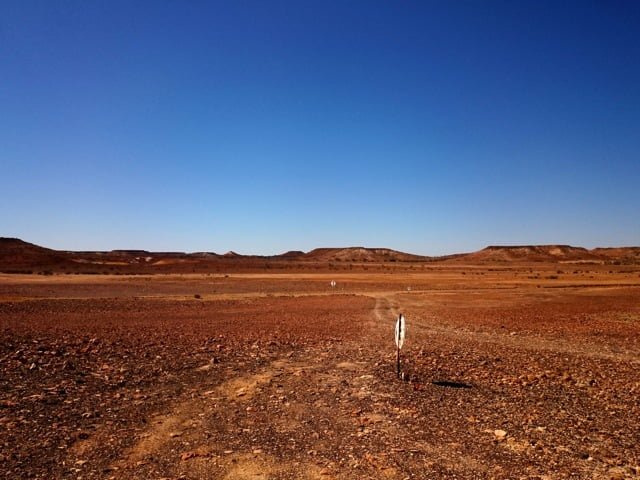 We arrived at William Creek hot and dusty from Coober Pedy, passing only one other car in the three-hour drive. The desert we had driven through was either gibber plain or red sand, usually with low vegetation.

At William Creek there is a hotel with accommodation, an airstrip that crosses the track and a campground. No need to book in February but I would recommend booking in the more popular mid-year months. The town, once a stopover for the Ghan, now claims fame as having Australia’s most remote pub, and as a base for exploring Lake Eyre by plane, which we did.

The pub is a museum in itself. Made of timber with timber furniture, it holds a dusty collection of old photos, superseded farm tools and items from around the area. And it serves great dinners. We enjoyed a Thai curry and a ‘parma’, so large it curled over the edges of the plate. A sturdy wood heater in the centre of the room suggested night temperatures must, at some time, get very low.

Lake Eyre has water in it once every ten years, and I had read that this was one of those years. Rains up north in January meant there was water in February. And indeed, we are lucky.

Before leaving Melbourne I booked a one-hour sunrise flight through Wrights Air. There are a number of flight itineraries available and a number of companies running them from various points of departure, so check which flight suits you best.

The outback is beautiful from the air. As the squirming ball of sun climbs to the edge of the world before melting across the land, the rocky ridges and daubs of vegetation below change colour. The sky and the ground are every shade of pink, purple and red.

Nothing can prepare you for the sight of Lake Eyre from above: not the tricky little lake we flew over earlier, nor the images in geography books. It is a huge expanse of water, as far as you can see. It is an eerie, rippled, wind-streaked blue as still as if painted onto the salt. We followed sweeping, salt-lined arcs in search of birds.

At Oodnadatta town we decided on a detour through the Painted Desert. We had needed to calculate whether this the detour, still considered a section of the Oodnadatta Track, was a safe option given the distance, the time, our diesel and water supplies.

This section of the Track would have to be one of Australia’s most remote, dusty roads and this suited us. More like the driveway to a homestead than a road, it was in good condition but required attention to skirt a few deep wheel ruts and pot-holes. The Track wound around small hills and ridges and at about half way, passed through the Painted Desert.

From the top of a viewing hill we looked over some of the most beautiful country I have ever seen: dry, sculptural and full of colour, yet still and silent. It was a huge watercolour landscape.

At various junctions along the road a sign and a faded track indicated a station or homestead out there somewhere. It is easy to lose your sense of direction in the desert especially when tracks and signs have deteriorated and look the same. This happened to us when, thinking we might camp the night, we turned off towards a homestead. When attempting to join the main road again we were confused by the choice of three roads. We drove for an hour or so not knowing if we were heading in the right direction, and while this caused some anxiety, it was a part of the experience.

The Mereenie Loop is an unsealed four-wheel drive road between Uluru and Alice Springs. The section of the loop between Kings Canyon and Alice Springs is referred to as Namatjira Drive. It follows the West MacDonnell Ranges.

The West MacDonnell Ranges are striking in the brooding light of the wet season. The skies sink towards earth with the weight of rain. Thunder tumbles around the rim of the ranges and sheet and fork lightening flash. But the sky holds onto most of the rain and the labouring storm takes a rest for a few hours, when the theatre begins again. Driving this loop is an experience I will not forget.

There are a number of places to stop along the way to do a short walk, or to detour to a lookout. Do this, particularly after rain as the bush smells like I imagine heaven to smell. Bird life is also abundant after rain. In small, fluid and shifting shapes, flocks of coloured finches move from tree to tree. Willy Wagtails hop along disused stockyard and fencing posts, and according to aboriginal stories, alert the walker to the presence of another. We stopped at Gosse Bluff, (Tnorala conservation reserve), Redbank Gorge, Ormiston Gorge, the Ochre Pits, Serpentine Gorge and Ellery Creek Bighole, all easy walks.

We bush camped and there are plenty of spots to do this. If you are after something more comfortable there is a welcoming and rustic hotel with rooms at Glen Helen Homestead Lodge. In February, the mosquitoes are very active after dusk and before sunrise. After sunrise the flies take over! We carried plenty of mosquito repellent and set up camp early enough to have finished dinner before sunset. For the flies we had hats with fly nets.

Nyinkka Nyunyu is a very impressive art gallery, museum and cafe run fully by the aboriginal people from Tennant Creek. What we expected to be an hour’s stop became a three-hour exploration. The centre and tour we had were all engrossing and we had no sense of time passing. Because we were the only visitors it being out of season, the curator gave us a personalised, ‘story’ style tour.

The curator was an aboriginal man who had experienced some of the history and happenings that were depicted in the exhibitions and storyboards. All aspects of aboriginal life and culture, as well as contact and relationships with the Europeans, were covered in the displays. The gallery walls were decorated with the work of many local artists, whom we met working in the studios incorporated into the building. There was so much art available for purchase that it was difficult to decide which to buy, and being a gardener with interest in bush foods and plants, I finally decided on a canvas called Bush tomatoes.

In the absence of a personalised tour, visitors carry a player with numbered recordings that match numbered stations around the centre. We followed this in the garden, which has been planted with educational purposes in mind. It is well laid out and garden enthusiasts will love it. There is a kitchen garden with bush tucker to supply the café kitchen. The café was due to open a couple of weeks after our visit, however we got to meet the trainer from Charles Darwin University who had just arrived to train some young people to work in the kitchen. Next visit I will stop for lunch!

The ideal time to travel to the outback is in February. While it is very warm and possibly very wet in February, the roads and camping grounds are empty. Be aware however that if you do choose to travel at this time you will need to check in regularly with a government road report site such as the Northern Territory road report website (www.ntlis.nt.gov.au/roadreport), or a tourist information centre. We also asked the locals for their opinions on roads. Roads can become impassable in the wet season, or may be damaged after heavy rain. For travelling off the major highways a four-wheel drive vehicle is essential.

Jacinta Agostinelli lives in Melbourne. She spends her time writing, caring for her grandchildren, developing and maintaining gardens using sustainable and organic methods, and is a director on the management committee of SPAN House in Thornbury, Melbourne. She enjoys spending time with her family and travelling near and far.