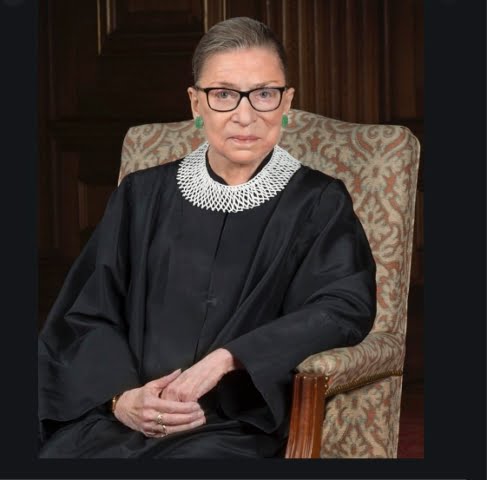 In all the tributes to U.S. Supreme Court Justice Ruth Bader Ginsburg for shattering the barriers denying her and other women justice and equality, haven’t we overlooked what was staring us in the face? Justice Ginsburg was an old woman aged 87 when she died. And the last barrier she shattered was the one erected in the path of women when they reach the age of 50.

RBG was at the height of her power and influence in the 27 years between the ages of 60 and 87. She was 60, when she was appointed to the U.S. Supreme Court, the age when most women are regarded as being way past their “use by” date.

Older women as a demographic group are at best ignored and at worst disdained.

But Ruth Bader Ginsburg said, here I am and I’m staying as long as I can do my job.

It was so typical of her. Throughout her life, she led the way not only in her legal judgements, but by personal example.

RBG showed that an old woman can be a leader and she can be powerful.

She demonstrated that ageing should not be a process of devaluation for a woman.

Just as she upheld the worth of every individual in the eyes of the law, so too she upheld the right of every woman to command respect and reject discrimination,  no matter her age.

If Ruth Bader Ginsburg Applied for a Job in Australia

But most probably, if Justice Ginsburg had taken off her robes and unrecognised, applied for a job in Australia, she would be treated the same way other women her age are treated. Most employers would consider her unemployable and refuse to give her work, and Government would resent such an unproductive person as a drain on resources. In a pandemic they might readily agree that she be sacrificed on the altar of economic recovery.

This is the way women over 50 are viewed in Australia. This is the thinking that informs Federal Government policy. And this is certainly the thinking that informed Budget 2020. It was a Budget that was bad for women generally, but disastrous for women over 50. It matters greatly because these women are sinking into a home- grown social catastrophe.

Covid19 did not create this catastrophe, it just accelerated a process that has been going on for almost a decade. If anything, Covid19 spotlighted the fact that it is not just some individual women who are having difficulties for whatever personal reasons.

What we are seeing is the progressive exclusion of women over 50 from the workforce. It is one of the most serious violations of women’s rights in Australia and it is happening on a mass scale.

Despite the unemployment rate amongst women over 50 being amongst the highest as a result of Covid19, there was nothing in the Budget that even referred to this problem let alone set out measures to address it. There are a specific schemes for apprenticeships and hiring subsidies for young workers, but nothing for women who are unlikely every to be employed again. These schemes actually incentivise employers to drop older workers and get subsidised for younger ones. An existing Government plan for older unemployed people has been described as an “utter failure” with only half the amount pledged actually being spent and more than 40% of those receiving these wage subsidies being out of work within 3 months.

Despite being fully aware, for a number of years, that the majority of people on Newstart were older women and that they struggled to survive on $40 a day, the Government is cutting JobSeeker and putting the unemployed back on $40 a day. The Government is also fully aware that older women are the ones who will be on these unemployment payments for the longest periods. And it is quite likely that they will be unemployed for the next 15-17 years until they qualify for the pension. For older women, JobSeeker has now become a sort of pre-pension that keeps them in preliminary poverty before they get on to the permanent poverty of the pension, which remains unchanged at $10 below the poverty line.

Unemployment predictably leads to a cluster of disadvantage. Its key outcomes are impoverishment, homelessness and the lack of means to escape violent relationships. This is because women generally have fewer assets, savings and super to fall back on compared to male contemporaries. Consequently, homelessness amongst women over 50 is accelerating at an alarming rate. But there was nothing in the Budget that even referred to this problem, let alone addressed it with a policy of social housing. Even pre-pandemic, there were over 405,000 women in this age group at risk of homelessness. Now, with the rate of Jobseeker cut back, and eviction moratoriums and mortgage deferrals ending, this rate of homelessness is set to skyrocket.

The Government policy of neglect towards older people is aggravating the economic decline of women 50+.

The majority of people on welfare now are older women.

The majority of homeless are now older women.

This policy is not only morally repugnant, it is also damaging to the economy.

It represents a spectacular waste of human capital. These women possess decades of workplace experience, skills and professional expertise.

There was only one Ruth Bader Ginsburg, but she was not alone. She led the generations of women now over 60 who, like her, were the first to enter the universities and break into the professions and the workforce in record numbers in the 1960s and 70s. These women went where others had not gone before them. And these are the women now being forced out of the workforce because of age discrimination.

Women over 50 as Key Drivers of the Economy

As a consequence of Covid19, the Australian workforce has shrunk by a million workers. Without immigrants and with low population growth we do not have the human resources to fuel economic recovery. Women with children must be enabled through affordable childcare to return to the workforce. But in addition, there is the invaluable resource of older women. Deloitte Access Economics estimated pre-pandemic that a 3% increase in participation by the over 55s would generate a   $33 billion annual boost to the national economy.

The view of women over 50 as key drivers of the economy is strongly upheld by Joseph F. Coughlin, director of the AgeLab at the Massachusetts Institute of Technology and author of ‘The Longevity Economy: Unlocking the World’s Fastest-Growing, Most Misunderstood Market.’ When these women are employed and have purchasing power, they become the “chief consumer of an entire demographic wave”. Coughlin estimates this fast growing market to be worth $20 trillion globally.

The reality is that Australia has an ageing population and by 2030 one in four Australians will be 65+. The majority will be women.

The Federal Government can continue to neglect older women or it can mobilize them in a way that both benefits the women and the economy. Otherwise, as women continue to fall off the cliff in ever increasing numbers, we will know they were pushed.

The Impact of the Pandemic on Older Women