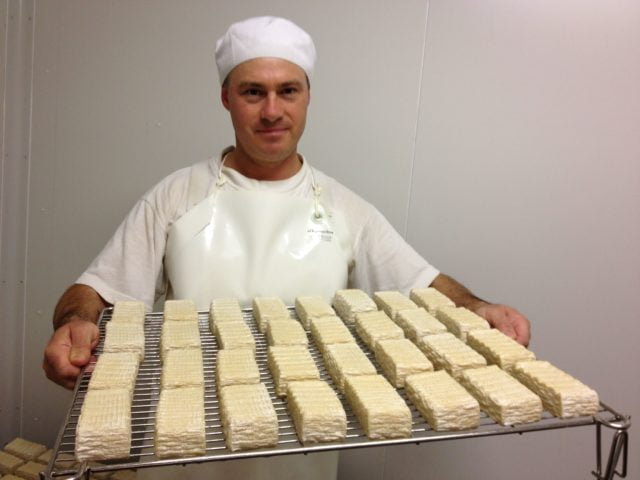 WomanGoingPlaces drove deep into a forest to film cheese being handmade by one of the leading artisan cheesemakers in Australia.

Burke Brandon recently won 2 Gold and 3 Silver medals at the Royal Sydney Cheese & Dairy Show. And he was also recognised as the 2013 Outstanding Farmer of the Year by The Weekly Times Farm Magazine.

Why did he win such distinction? After all, sheep have always been central to Australia’s wealth, history and and folklore. But Burke is not interested in the sheep’s wool or its meat. He is part of a small group of farmers who are pioneering the breeding of sheep for its milk. Cattle and cow milk have traditionally dominated the dairy industry in Australia, but now as many of these cattle farms go into decline, some farmers are experimenting with sheep dairies.

On their beautiful family farm in South Gippsland Victoria, Burke and his wife Bronwyn are involved in the whole process – growing the pastures, breeding the sheep, milking them and handcrafting the cheese.

From paddock to plate.

The farm and their range of Prom Country cheeses mark the evolution of the Brandon family as cheesemakers. It all began in the 1990’s when Brandon’s parents, Jan and Trevor Brandon set up Red Hill Cheese on the Mornington Peninsula. Their handmade cheeses developed such a following, that streams of people continue to make their way down winding dirt tracks through wooded hills, to taste and buy Red Hill cheeses at the cellar door.

And this is where, in a forest of eucalyptus trees, that WomanGoingPlaces was able to film Burke Brandon during the entire cheese making process, something not usually open to the public. What made it such an exciting experience was that we could see each stage of the process. In commercial dairies, you can’t see the milk and you can’t see the cheese, as they are concealed in massive closed vats and the entire process is mechanised from start to finish.

We watched the miraculous moments when milk turned to curds and whey, and when the curds then turned to cheese.

Amazingly the run-off whey is not discarded. Instead, winegrowers from the region come to collect it and spray it on their vines, to reduce mildew and allow them to grow their grapes organically.

Prom Country Cheese is now celebrating the opening of their new specially designed Cheese Cellar Door on the farm in South Gippsland.  As well as tasting and buying their cheese directly from this farm gate outlet, there are displays of the farming and cheese making process. Classes in cheese making will also be held there. You are welcome to visit the farm.