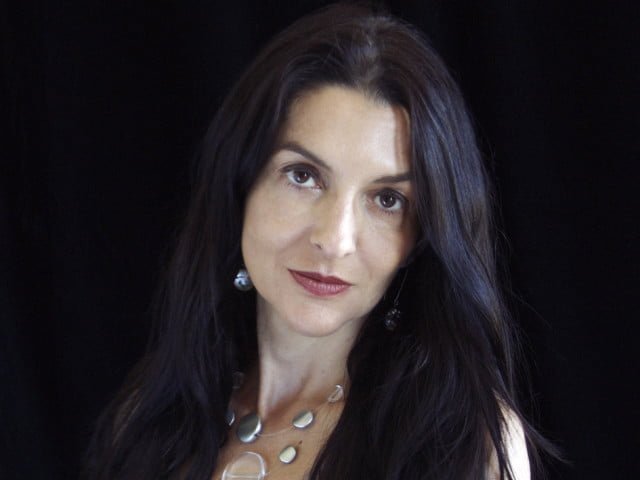 Polixeni Papapetrou passed away in April 2018. We keep this post about her as a tribute to this courageous woman and acclaimed artist.

When photographic artist Polixeni Papapetrou chose her 5 favourite places to visit in Australia, they were not just travel destinations. They were landscapes that captured her imagination and inspired her to transform them into her art. Dramatically beautiful, they are insightful and unsettling works.

Her art provides us with a unique perspective on these landscapes.

Polixeni has said that in her work, landscape is another protagonist in the narrative.

Polixeni’s parents immigrated to Australia from Greece, and she was born and raised in Melbourne. She qualified and practised as a lawyer. But it was her intense and singular vision as a photographic artist that won acclaim and forged for her an Australian and international career replete with grants, exhibitions and awards. Her works have featured in over 50 solo exhibitions, and over 90 group exhibitions in Australia, the United States, Asia and Europe. They are held in private and institutional collections in leading galleries here and abroad, including the National Gallery of Australia, the National Gallery of Victoria, and the Museum of Contemporary Art, Sydney. 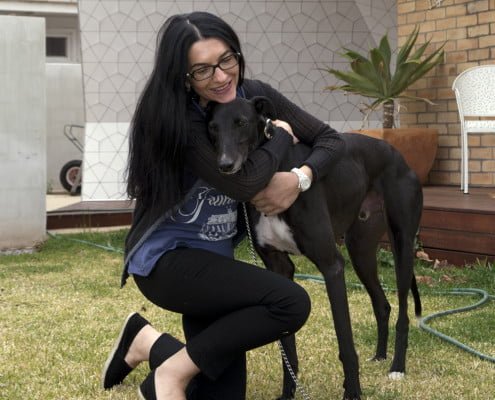 Polixeni and Lexi by Robert Nelson

Polixeni’s art has evolved through a series of themes.

Subsequently and most notably, Polixeni created the series on childhood and its shifting meaning. Featuring her own children, Olympia and Solomon as they grew into adolescence, the series uniquely combined reality and imagination, nature and theatre, the benign emblems of childhood story-telling with an underlying sense of menace.

In later works, Between Worlds, (2009), The Dreamkeepers (2012), and The Ghillies (2013) masks and costumes worn by the children allow them to transgress boundaries – young to old, human to animal – and transform them into disruptive and unsettling figures in picture-perfect landscapes. As Polixeni describes it: “ I have these characters in my mind and like to find the habitat for them and then photograph them. For me it is about reconciling my inner world, possibly the unconscious to the real world.”

It was her son’s interest in the camouflage outfits named after Scottish gamekeepers and used in computer games and by the military, that inspired the stunning images of The Ghillies. Polixeni photographed Solomon wrapped in camouflage in the landscape. But in this series, instead of being hidden in the landscape, he seems to grow out of it.

Despite serious illness, Polixeni continued until her death to create new series of works with the continued enthusiastic participation of her children and her husband, art critic and academic Robert Nelson. 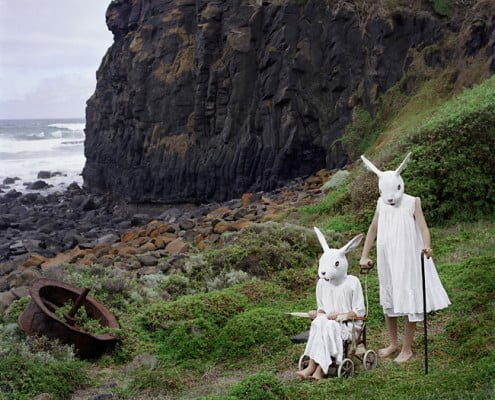 When friends invited us to their holiday home in the coastal town of Merricks, on the Mornington Peninsula in Victoria I was eager to go. I knew about the town as it is the home of the popular 1920s- built Merricks General Store and Stonier’s and Merricks Estate wineries (two of my favourite reds). I was enchanted with a site in Flinders, known as Bush Rangers Bay. The contrast of rural and the wild coastal terrain of Bass Strait makes for breathtaking landscape. 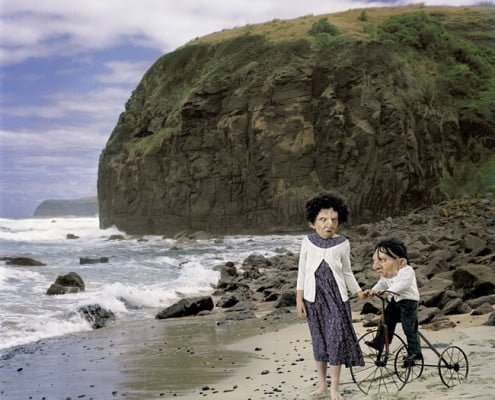 I have made numerous pictures at this location such as The Loners, portraying two elderly rabbits walking along the coast line framed by basalt cliffs, another of two horses enjoying the violin, three industrious pigs gathering straw at the site of the old quarry and a mother and son collecting shells on the coast. When making The Shell Collectors we were caught out by a rapidly changing tide and while the children scurried away in a flash, I had to gather my camera equipment before the encroaching waters carried it away to sea!  Nearby is the formidable Flinders Blowhole where if you dare you can walk on the rocks or even walk to the spectacular Cape Schank. 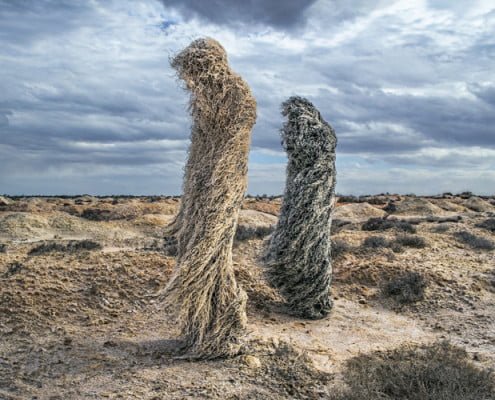 Mildura is a short plane trip from Melbourne, but I find the six hour long scenic journey by car one of the most relaxing drives in Victoria. As we progress through the drive, I love seeing the earth change colour turn from brown to a rich red. That is the signal that we have arrived in Mallee country, on which the beautiful stunted mallee tree grows. Before we reach our destination in Mildura to spend time with family friends, the         De Pieris who run the acclaimed Stefano’s restaurant and Mildura Brewery, we stop off at various locations to make work.

The semi-arid Murray-Sunset National Park is a must stop for me. The landscape is virtually untouched other than the site of the Raak Plain, an old gypsum mine which looks like an apocalyptic landscape. I made the picture called Study for Hattah Man and Hattah Woman on the Raak plains. 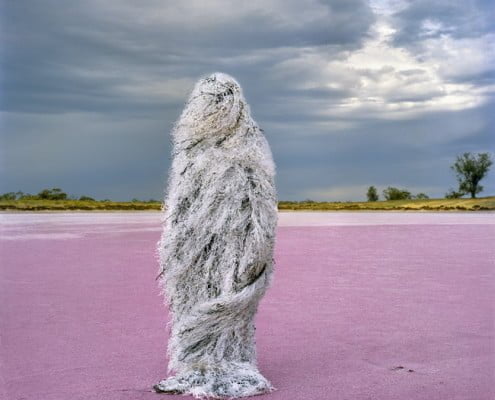 The landscape has a mysterious and ancient mood that I wanted to capture. I also love the Pink Lakes in the same park which change colour throughout the year. During Spring the lakes turn a deep pink colour and you can walk across them. I made the picture Salt Man on the Pink Lakes. The gorgeous pink coloured salt we have on our table at home is produced by the Murray River Red Salt Farm.

A short distance further from Mildura crossing the Murray River into New South Wales brings you to the town of Wentworth and the spectacular ancient site of the Perry Sand Hills. It was once a camping and hunting ground for Aboriginal people. As a result of the Ice Age, the area turned into sand dunes sculpted by wind erosion over thousands of years. As far as the eye can see, the area feels like a scene from another planet, acres and acres of shifting orange coloured sand dunes. I have visited this site a number of times to make photographs. 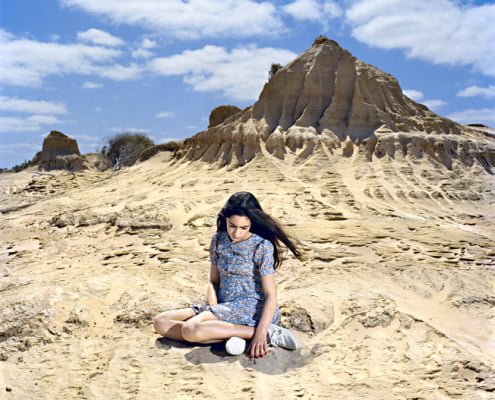 Another favourite destination is Lake Mungo, a significant ancient Aboriginal site, which was once  an Aboriginal fishing, hunting and camping ground. During the last Ice Age the water levels dropped and the lake dried up. Subsequent erosion of the land revealed human and animal remains as well as tools. The most spectacular discovery were 40,000 year old skeletal remains known as ‘Mungo Man’ and ‘Mungo Woman’. Walking on the dried lake has a moon-like eeriness about it.  The small museum on the site and the old woolshed are added attractions. Many visitors camp on the grounds, but as I can’t wear my heels camping we stay in the Lake Mungo Lodge. 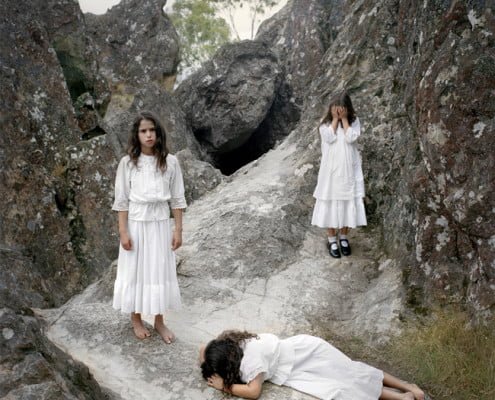 As a teenager in the 1970s I was captivated by Peter Weir’s film, Picnic at Hanging Rock. Set on Valentine’s Day in 1900, a party of schoolgirls ventured out for a school excursion at Hanging Rock. Three of the party set out on a walk on the rock and were not seen again. The story of the three missing schoolgirls has become embedded in Australia’s cultural imagination to the point where people are surprised to learn that the account is a fiction. When I discovered that Hanging Rock was just outside of Melbourne, I hopped to and immersed myself in its mysterious history. 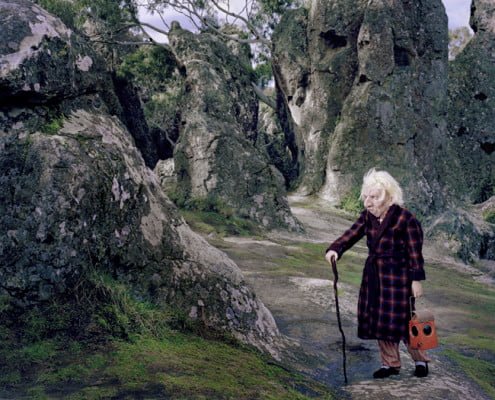 The site itself is one of the world’s most extraordinary and significant geological formations. The Rock is a former volcano and is shaped into pinnacles created over 6 million years ago when lava rose through the earth’s crust. The magma that rose to the surface is only found in two or three other places in the world. It is a ghostly place, wild and chaotic and is a perfect backdrop to set the scene for my work portraying the ancient, spiritual wilderness of Australia.

I was moved to make a photograph about the three missing schoolgirls at Hanging Rock as well as making Magma Man and The Lantern Keeper as I could imagine my invented characters living there, hiding in the Rock’s many nooks and crannies. 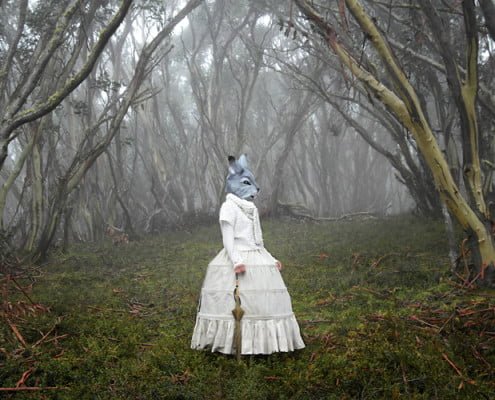 When you mention Mount Buller, in Victoria’s high county, you immediately conjure up images of snow and skiing. I love to visit the mountain in the warmer months of the year, as working on-location is more comfortable and easier. The stunning snow gums at Mount Buller are also fully expressed in the warmer months and create pockets of natural beauty set against these spectacular mountains.

When we made The Wanderer, we arrived the day before and were surprised by sudden overcast conditions, a thunderstorm and a blackened sky. I despaired and thought that I would not be able to take photographs as planned on the following day. I resigned myself to having a holiday, but plans were once again changed when we woke up to a brilliant blue sky the following morning. 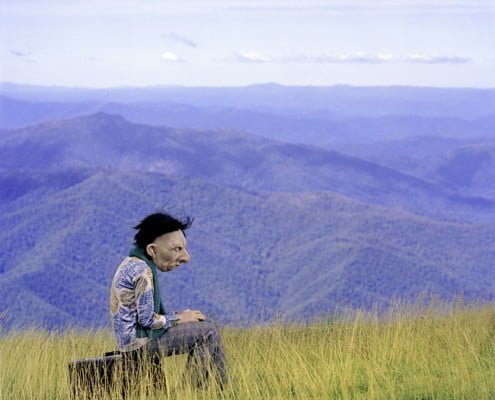 Similarly when I made The Visitor during the Spring, a dampness descended on the mountain, which was atmospheric. I thought that I’d have days of this perfect photographic backdrop, but once again we woke to a clear sunny sky the following day.

I also made The Philospher at this location. The image reflects a person alone on the top of a mountain. It symbolizes the solitude of thought where the vastness of the landscape is the counterpoint to the intimacy of an internal world. It is an internal/external that we all struggle with. I love the way that the landscape in the High Country plays tricks on me.  We also love to visit the nearby town of Mirimbah, eat at the café, walk in Mirimbah Park and jump into the lake when it is hot enough.

* If you are friendly with your neighbours, let them know that you will be away. Otherwise leave home in the dead of night! And don’t forget to put the dogs in kennels.

* Research the history of the areas that you are visiting. And take maps. Intuiting your way across foreign terrain is only great if you enjoy becoming seriously lost.

* Pack as lightly as possible as you always accumulate things along the way. Kidding yourself if you say that you won’t.  But always take plenty of water.

* A book goes a long way to relieving the boredom of travel.  Yes holidays can be a bit boring, but you can always attempt an interesting conversation too.