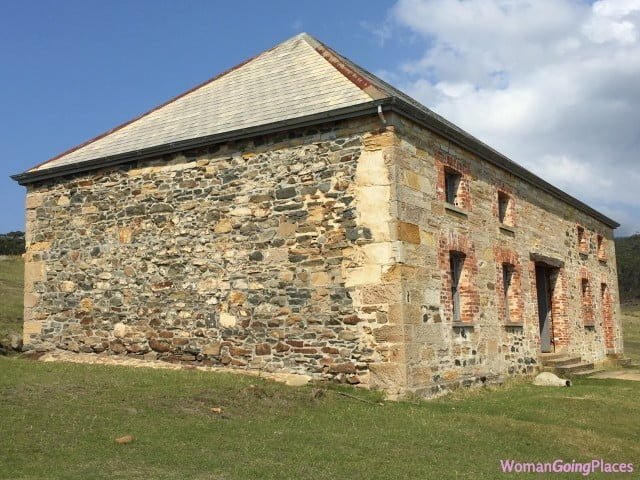 The boat pulled into the clear turquoise waters of a small cove. We were surrounded by rocks aged from 280 million to over 400 million years-old, pressed together in configurations seen nowhere else in the world. And then lunch was served.

WomanGoingPlaces was on a circumnavigation of Tasmania’s Maria Island. Maria Island has developed an international reputation for the 3-5 day walks held in this Tasmanian National Park. But we found that cruising the coastline is another way to visit the island.

We boarded the boat at Triabunna on the mainland and set out for a trip right around Maria Island. And we saw what makes this tiny island just off Tasmania’s east coast such a compelling place to visit.

Maria Island holds a remarkable position in Australian history. It is a refuge for Australian wildlife. It has great natural beauty, and is a geological wonder.

Before the colonial era, Aboriginal people journeyed regularly to Maria Island and evidence of their presence remains. Its earliest European visitors were whalers and sealers. Then in 1825, it became one of the first penal colonies set up by the British in Australia, even before the more infamous Port Arthur.

Today, it has become a ‘wildlife ark’ for threatened native wildlife.

It is one of the best places to see wombats, wallabies, pademelons and forester kangaroos in their natural habitat.  They roam undisturbed as no cars, shops or hotels are allowed on the island. There are over 114 bird species including introduced Cape Barren Geese. Our guide Kirsty lived up to her nickname “Wombat  Whisperer” when she led us close to several wombats, including a rare encounter with a mother and baby.

Tourists are allowed visits and short stays, but may not reside on Maria Island.

The complex beauty of Maria Island’s geological formations along the coast has left international geologists in awe. These formations are best viewed offshore by boat.

Our journey along the coast gives us spectacular views of the tall limestone Fossil Cliffs containing many ancient fossils, and the sandstone Painted Cliffs where iron oxide has stained the rocks with stunning splashes of colour – red on ochre and grey. We see rocks called Drop stones which 300 million years ago were dropped by glaciers.

Even the youngest rocks here were formed 100 million years before the dinosaurs.

The boat passes a waterfall cascading down rugged cliffs into the sea and remarkably stalactites formed on the outside of a cliff. We enter a deep cave studded with fossils. And even though it is dark, through the magic of the camera lens, cake-like layers of  bright pink, green, brown and golden rock are revealed.

There is an abundance of marine life including seals and dolphin. We were gazing across the water when suddenly a flying fish leapt out of the sea, its iridescent winglike fins spread taut as it flew  a metre above the water for about 15 metres before it dived back into the sea. We were too stunned to reach for our cameras, but fortunately someone on this boat had photographed just such a fish the previous week.

Spectacular white crescents and pristine bays of blue-green waters form the contours of Maria Island. We see immaculate beaches from the boat, and then at Darlington, we dock at one of them. These pure sandy beaches are composed of the same white granite as the world-famous Wineglass Bay on Tasmania’s Freycinet Peninsula.

Darlington is the site of the World Heritage listed original convict settlement. We spent some time walking around. The British abandoned this settlement in the mid-1800s. Instead, the colonial rulers established the even more remote penal settlement of Port Arthur. Some of the original convict quarters are still standing at Darlington and are now used as dorms for travellers.

It is worthwhile to wander through Darlington’s remarkably well-preserved buildings. Besides the original convict buildings, are several impressive houses, including the Coffee Palace built by hopeful settlers in the 19th Century. Life was very harsh there and they failed to sustain their settlement. But they left a fascinating record. The testimonies of these entrepreneurs as well as those of such notable convicts as Irish nationalist leader William Smith O’Brien, exiled here for his part in the Young Irelander Rebellion of 1848, give Maria Island its rich mix of history and natural splendour.

All photos by Rosalie & Augustine Zycher apart from Flying Fish by Karen Dick.

Music: Albare – No Love Lost from the album The Road Ahead