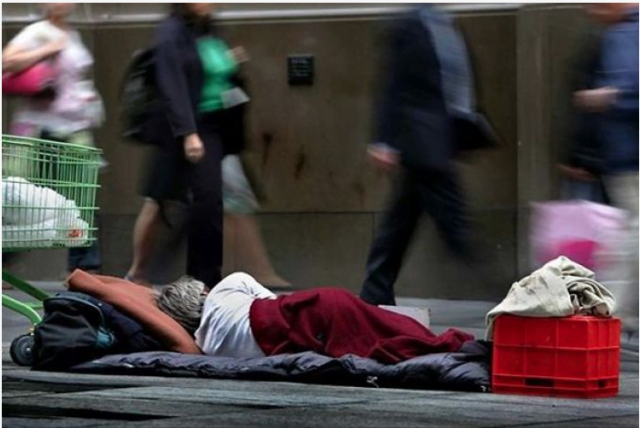 Paul Keating recently expressed fears that as our population ages it will be divided into two Australias –  the privileged Australia with all sorts of assets, and the Australia of people condemned to the pension and poverty. But we are already there. We already have a generation of older women who have worked all their lives and now find themselves impoverished. They are women aged over 55 and there are over a million of them.

Referred to disparagingly as ‘boomers’, these women were actually the first generation of women in history to enter the universities, the professions and the workforce in mass numbers. This should have ensured their financial security as they aged. For many it did, but for too many it has not.

To try to find out how many older women face impoverishment you have to really search for the statistics. Older women are not only invisible socially, but are also often overlooked in economic data. Specific statistics about them are usually not included or appear as an afterthought.

Take for example, John Daley CEO of the Grattan Institute who rejected Keating’s fears of impoverished old Australians and breezily assured us that super and “savings won’t run out at 90 – multiple sources show that on current trends most Australians die with savings almost as large as when they retired.”

Which trends was he referring to? Certainly they totally overlooked older women who have neither savings nor super.

Two other recent reports were just as cheery. Credit Suisse’s Global Wealth Report pronounced that Australia has overtaken Switzerland as the country with the highest median wealth per adult in the world. Figures about older women facing dire financial stress were subsumed by the general affluence. And the Centre of Excellence in Population Ageing Research added to this bountiful picture by remarking that the median standard of living of older Australians has improved but is “held down by the typically much lower balances of women, which average 64 per cent less than men’s.”

WHAT IS THE REAL PICTURE?

The ABS 2016 Census recorded that there were 1,060,515 women aged 65+ whose income was less than $499 per week, with $433 per week being the poverty line. That was two years ago. The number of women in this cohort has increased since then and will continue to do so.

OECD statistics this year recorded that 35.5% of Australian pensioners, the majority being women aged 65+, live in income poverty compared to only 18.4% in Turkey! The figures in the table show just how badly Australia compares to other OECD countries. 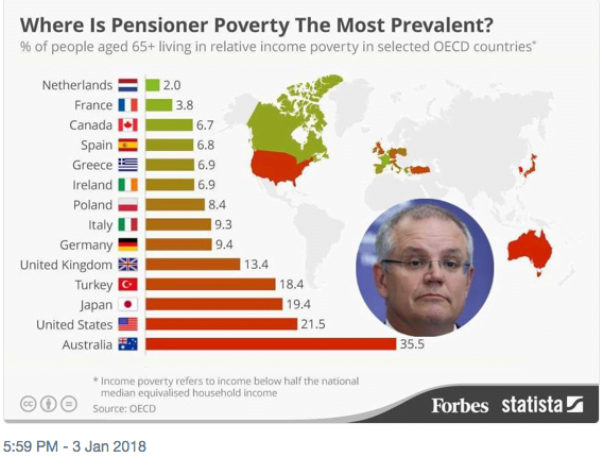 One in three Australian single women – unmarried, divorced or widowed – live in poverty by the time they are aged 60.

Thirty percent of people on Newstart are over the age of 50, and most are women.

About 40% of renters aged 65 and over are below the poverty line. And, among those living alone, the poverty rate rises to 60%. The majority are women.

We are already seeing thousands of homeless older women who can only afford to eat one meal a day, who couch surf, sleep in cars, or on the streets, or even in cemeteries.

Their economic disadvantage is the consequence of a history of gender discrimination.

An entire generation of women over 55 spent decades in the workforce but have little or no superannuation whatsoever because super was introduced only in 1992.

And throughout their working lives, these women suffered decades of economic discrimination, inequality and injustice in the following ways:

This economic discrimination has resulted in financial and social problems on an unprecedented scale. It has meant that unlike men, women enter old age with little savings, super or assets. And they are expected to make it last for 20-30 years.

These women worked, raised families, cared for relatives, and contributed essential services to society. Society could not function without their essential work. And it was work. A lifetime of unpaid and underpaid labour, as well as unequal access to employment and advancement. To abandon them now is unconscionable. It is also not a realistic option.

Nor is it realistic to tell them to go get a job.
The reality is that because of ageism, older women cannot get work however much they would like to both earn an income and use a lifetime of skills and professional expertise.

A newly released government report, Employing Older Workers, overseen by the Australian Human Rights Commission, found that almost a third of Australian employers will not employ people over 50, despite the practice being illegal. The government has let them continue to do so without sanctions. Some of those discriminatory employers may include government agencies.

Nevertheless, the Federal Government just issued new regulations that will make things even worse for older job seekers. As of September 20, in order to continue receiving Newstart, job seekers aged 55 to 59 who previously had to do 30 hours per fortnight of voluntary work, must now do at least half of these hours as paid work. And those over 60, will for the first time, have to do 10 hours of paid work per fortnight.
In the face of the clear evidence of discrimination against older workers, this regulation can only be interpreted as a cynical policy to cut off even the inadequate Newstart funding that they receive.

Inevitably, it will exacerbate an already perilous situation for older Australians.