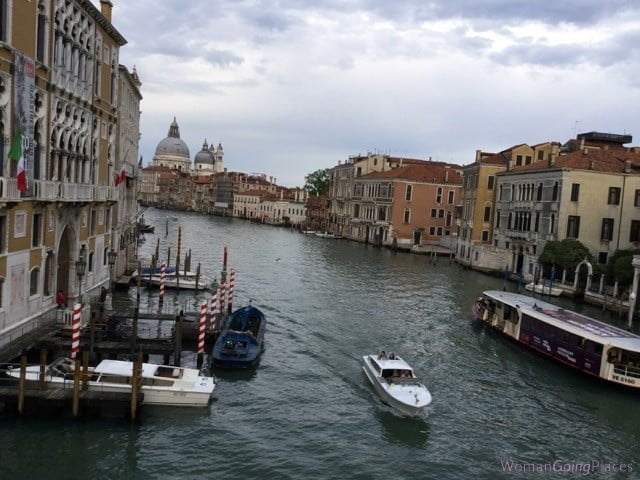 WomanGoingPlaces invites you to hop on our boat and glide down the Grand Canal of Venice. Click on the video below to join our journey on one of the most glorious waterways in the world.

If you have never been to Venice, our film will show you the magnificent marble palaces that line the canal, the graceful gondolas, the bustling boats   – all part of the vibrant flow of life on the water. Even if you have been to Venice, this film will bring its beauty back to you.

We head down the S-shaped curve of the canal in the direction of Arsenale and St.Mark’s Basin.

As you can see, the Grand Canal teems with traffic. Vessels of all shapes and sizes – passenger boats, small outboards, sleek speedboats, timber taxis, luxury liners, barges, and of course, gondolas – all going at different speeds and in different directions, horns honking and waves lapping. There are no traffic lights, no order and probably few rules, and yet there is a harmony and rhythm to it all – as if all the boats were choreographed into a gigantic ballet on the water.

Vaporetti, the water buses, are the public transport system. They ply their way up and down the Canal with stops all along the waterway. You can hop on or off at any of these stops. But surprisingly not all stops are on the same side of the canal and depending on the destination, the vaporetto may criss-cross the Canal cutting in front of other passing boats.

As well as passenger boats, the Canal is also full of boats servicing the daily needs of the city. There are police patrol boats, postal boats delivering mail and parcels, vessels with goods and supplies, even construction barges with cranes and excavators.

Long, elegant black gondolas row slowly by. Tourists lounge on the cushions taking selfies on sticks, and singing along in camaraderie with the accordion player.  There are still gondoliers rowing the Grand Canal as their fathers and grandfathers did before them. And the craft of making gondolas has also been handed down for generations and is still being practised in Venice today.

No city in the world has as many palaces as Venice. There are almost 100 of them along the Grand Canal. These magnificent buildings were an expression of the power and wealth of Venice as the greatest European seaport, and the centre of a trading empire, for 700 years between the 11th and 18th Centuries. Venice’s rulers, noblemen and merchants sent their fleets of ships around the world to bring back silk, spices, precious stones and fabulous riches.

Venetians sought to flaunt their family’s wealth and power by building ever more splendid palaces in the most prestigious part of Venice – the Grand Canal. These palaces were not only the family homes but also the trading headquarters for their businesses. The  uppers floors were the family residence. But the bottom floors were the warehouses for storing the goods and the offices for running the business. Because of the width and depth of the Grand Canal, ships from distant lands were able to sail right up the Canal, tie up next to the palace, and deliver goods directly to the family warehouse.

Still today, all along the canal, are small docks where gondolas and boats can tie up at the entrance of buildings. As you pass, it is easy to imagine the life in past centuries. Aristocratic ladies coming out of their palaces wearing gorgeous gowns, and the 14-inch heels they used to wear to keep their dresses above the dirty streets as they step into gondolas to be transported to a ball.

The Rialto and Accademia Bridges

We pass under two of the four famous bridges that span the Grand Canal. The 16th Century Rialto bridge is the oldest of these bridges. Designed by Swiss engineer Antonio de Ponte, the arching stone bridge allowed tall ships to pass under it. This is why the Rialto fish market was able to flourish right next to the bridge for over 1000 years.

The Accademia Bridge is in the final loop of the canal just before it enters St. Mark’s Basin. It is adjacent to the Gallerie dell’Accademia which houses the world’s greatest collection of Venetian art.

The previous Accademia bridge was a wooden structure designed by Miozzi and built in 1932 to replace the original bridge steel built in 1854. The citizens of Venice loved Miozzi’s bridge so much, that when it rotted and was in danger of collapse, it was replaced in 1985 with a precise copy of his wooden bridge.

We are approaching our final stop – Arsenale. Here, at Arsenale, lay the core of Venetian power – the mightiest medieval shipyards the world had ever seen – capable of producing a new ship each day.

Now the massive structures of the shipyards with their soaring wooden ceilings that housed tall galleys, have been turned into breathtakingly beautiful art galleries.

This is now where the annual Venice Biennale is held. Every two years, Venice hosts the Venice International Art Biennale, the oldest and most prestigious contemporary art exhibition in the world. This year, the 56th Venice International Art Biennale is being held. It is open until 22nd November and is quite extraordinary. In alternate years, the Venice Biennale of Architecture takes place.

We have arrived at the last stop and it’s time to hop off the boat.

But use our video to take you down the Grand Canal whenever you wish.