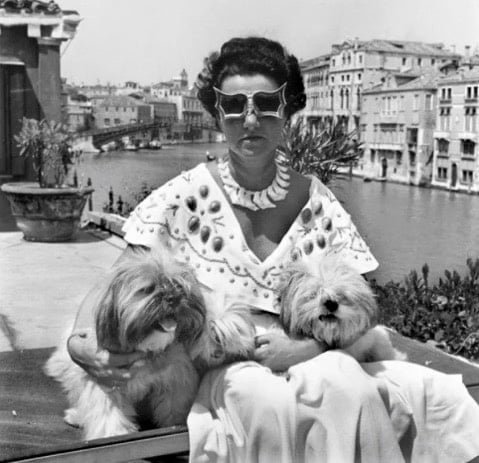 Peggy Guggenheim (1898-1979) made an unparalleled contribution to the development of 20th Century modern art. But 37 years after her death, the story of Peggy Guggenheim is still bound up in misconception and prejudice. Much of the commentary about her recognises her role as the ‘midwife of modern art’, but trivialises this by describing her endlessly as a sex addict.

Even her remarkable ability to recognise and nurture great artists in their formative years, was too often attributed solely to men telling her what to do, rather than to her own judgement and innate taste.

The Peggy Guggenheim Collection museum on the Grand Canal in Venice is today one of the most visited attractions in the city. It houses the collection she acquired between 1938 and 1979. These masterpieces of 20th Century European and American art  and sculpture include the works of Picasso, Pollock, Ernst, Dali, Klee, Braque, Man Ray, Chagall, Mondrian, Calder, Giacometti, Kandinsky, Duchamp, Tanguy and Miro.

Peggy Guggenheim bought this 18th Century palace, Palazzo Venier dei Leoni, in 1948 and over the next 30 years made it her home, gallery and ‘salon’ of the avant-garde. The best and the brightest gathered there – artists, intellectuals, and writers including Beckett, Joyce, Stein, and Pound. They were her friends, her lovers and partners.

Her foremost commitment throughout her life was buying the works of emerging artists, and supporting them with patronage and commissions to create new works.  She provided them with a launching pad to international recognition through the 3 galleries she founded in London, New York and Venice.

Peggy Guggenheim first began her role as one of the pioneers in the modern art movement in 1938. She had opened her first gallery in London and even though war was looming, she went to Europe to buy works of little-known artists. Their works were very cheap, not only because the artists were desperate to sell and escape the Nazis, but also because many of these modern art works, including Picasso, Dali, Braque, Mondrian, Brancusi and Leger were not considered valuable by the art establishment at the time. When Peggy asked the Louvre to include the works she had bought with their collections that they were shipping to safety, they refused because they did not believe they were worth saving. She had to find her own way to smuggle them as household goods out of Europe. She then exhibited them in her gallery in London.

During the war she moved back to her native New York and set up a second gallery, Art of This Century, in 1942. It immediately became the most stimulating space for contemporary art in New York. Here she exposed the Americans to her collection of Cubist, Abstract and Surrealist Art.  In addition, Pollock, Motherwell, Rothko and other American artists were first exhibited in this ground-breaking gallery. Pollock was still working as a carpenter, when Peggy Guggenheim lent him money to buy a house and build a studio, and she commissioned him to paint a massive mural for her New York apartment.

Peggy Guggenheim supported these pioneers of American Abstract Expressionism and played a vital role in the development of America’s first art movement of international importance.

She was also in the vanguard of another important movement. As early as 1943 she staged 31 Women, an exhibition of female artists, at her New York gallery. And then again in 1945, she held a second show devoted to women entitled The Women of Art of This Century.

After the war, she closed her gallery, left New York and in 1948, Venice gave her an entire pavilion at the Biennale to exhibit her collection. “I felt like a whole country,” she said. Peggy Guggenheim made her home in Venice from that time onwards.

Despite the glamour and vitality of her bohemian lifestyle, Peggy Guggenheim actually led quite a tragic life. Her father Benjamin went down with the Titanic when she was 13. She was estranged from her mother, her sisters and from her uncle, Solomon Guggenheim, (who later founded the Guggenheim Museum). Peggy’s first husband, Laurence Vail was abusive and even tried drowning her in the bathtub. She had a great love for literary critic John Holms. However, during their 5-year relationship she had 7 abortions, ostensibly because an unmarried woman having children at the time was not acceptable. Holm died tragically during a minor operation.

Peggy later had an unsuccessful marriage to artist Max Ernst, who left her in order to marry one of the women artists Peggy had exhibited in her New York gallery. Her relationships with her children from her first marriage, Sinbad and Pageen, were particularly painful. And Peggy was devastated by her daughter’s suicide. Some of Pegeen’s art work is still displayed in the museum.

After her death in 1979, Peggy’s house and collection passed to the Solomon R. Guggenheim Foundation.

Peggy Guggenheim is buried in the grounds of her former home.

There is a fascinating new documentary about her life called ‘Peggy Guggenheim – Art Addict’ directed by Lisa Immordino Vreeland.

Glide Down the Grand Canal of Venice with WomanGoingPlaces
Scroll to top
Posting....