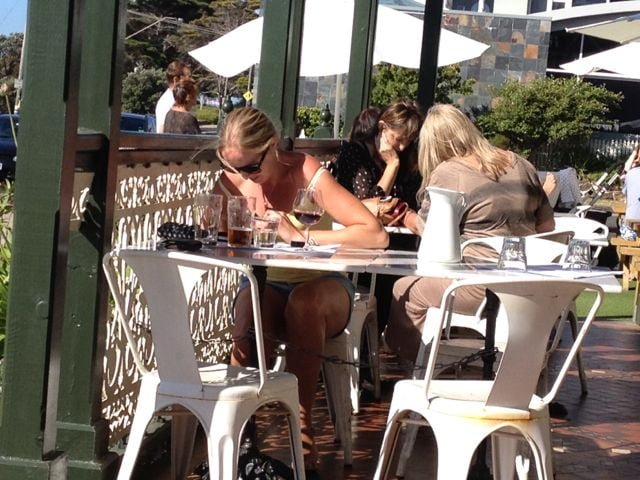 Why are women terrified of dining solo?

When Australian women travel overseas on our own, we know that part of that experience means eating out alone. But when home in Australia, a woman dining out alone is considered a rarity, and may even be treated as an oddity. We seem to view it as an uncomfortable if not humiliating experience. It can be such an ordeal for women, that few feel brave enough to put themselves through it.

I don’t mean grabbing a sandwich in your lunch-break or going to a cafe. I mean if by choice or circumstance, you find yourself alone for lunch or dinner – would you take yourself out to a fine restaurant?

Even women who travel for business and are undaunted about representing their companies  find it difficult to face eating solo in hotel restaurants. “I’d rather call room service for a cheese sandwich than have to walk into the restaurants downstairs, unaccompanied,” said my friend Jean, a senior executive at a multinational company.

Brave women, women of intelligence, strength and capability are intimidated by the prospect.

But why is it, when we have overcome so many obstacles on the road to equality, our bravery deserts us when it comes to eating dessert on our own?

Here’s what happened to me when I went to a very trendy restaurant in town for lunch.

I was greeted by the maitre d’ with the question “Is it JUST you?” with the decided emphasis on the ‘just’.

So I put on my biggest smile and confirmed happily “Yes, it’s JUST me.”

I was led past the crowded tables all the way to the back to a place on the bar near the toilets. I looked around and saw that out of more than 100 people, I was the only woman there on her own. However, there were several men eating lunch on their own – not an uncommon sight.

While other people were served around me, even those who had arrived after me, somehow I had become invisible. No-one approached to set water or bread before me. No-one brought a menu. I waited and tried to signal to the waiters but their attention always slid away towards groups of patrons. I noticed the chef working next to me in the open kitchen looked over at me with growing concern. I signaled and waited fruitlessly for more than half an hour. Finally, the chef called to a waiter to attend to me. By that time I had lost my appetite and I walked out.

This type of experience would make women choose to eat at home or seek anonymity with a sandwich in a coffee shop.

But I’ve also had a few surprisingly good experiences in dining out alone.

On a hot summer’s day as I walked into the vineyard-restaurant, I felt that there was no way I would get a meal. Groups were packed around all the tables and spilling out onto the deck. I stood in dismay at the entrance, and then the proprietor came up to me. Instead of saying “Sorry, we’re full”, he said “Wait a minute.” He went out the back and brought out a small table and chair and placed them in the best position overlooking the vineyard. He then offered to prepare me a special version – suitable for one person – of the share plates that were their speciality.

He was gracious and accommodating, just as a good restaurateur and host should be. I became absurdly grateful for being treated in the same welcoming way as other patrons who came as a couple or a group would be treated.

What then is it that prevents greater numbers of women from going into a restaurant for dinner alone, as a man might? Is it the occasional bad experience or is it something else?

There are no restrictions mandating that we always have to be accompanied by a male, as is still the case in many societies. So there is no social prohibition. But there is a very powerful self-prohibition. And it’s based on fear. What will others think of me?

Perhaps we are afraid we are signalling that we have failed to acquire a companion, and that we are objects of pity. Or it could be we are afraid that people will misinterpret our being alone as being available.

We put up this barrier of negativity, so we don’t have the confidence to walk into a restaurant. Walking alone into a restaurant  becomes as frightening as walking onto a stage. It’s as though everyone is looking at us. We feel completely exposed with hundreds of critical eyes focused on us. We build it up in our minds into a 3-Act drama when in truth, how much scrutiny is there really going to be? A few seconds as the waiter leads us to our seat. Most people are too absorbed in themselves to give you more than a passing glance.

But it’s all about women feeling at a disadvantage in social situations when alone.

Many women don’t have the nerve to walk confidently into a restaurant and order from the staff without feeling they have no right to be there. Perhaps we feel we don’t deserve the kind of attention, and even fuss, that other patrons would expect.

Sometimes we are made to feel we are inconsiderately occupying a table that could be earning twice as much. So frequently we are not offered a table, but a seat at the bar or are squeezed into a corner.

We might help change that treatment by patronizing restaurants that welcome solo women diners. After all, in terms of numbers, we are actually an economic force, not a liability.

There is reason to be optimistic. I remember reading that Ruth Reichl, the famous New York Times restaurant critic, would always visit a restaurant several times before writing her review of the dining experience. So I decided to do the same and re-visited that trendy restaurant that I had walked out of 6 months earlier. This time however, even though the place was packed, I was greeted warmly and instead of being led to the bar, was shown to the only available table, right in the centre of the restaurant. The service was prompt and pleasant, and the food was good. A totally different dining experience! Why? Who knows, perhaps a change of staff with a better attitude.

But to begin with, we need to change our own attitudes. So let’s not hesitate to take ourselves out to lunch or dinner when we feel like it. Let’s savour our freedom, enjoy a beautiful meal in pleasant surroundings, and not waste a second worrying about what other people think.