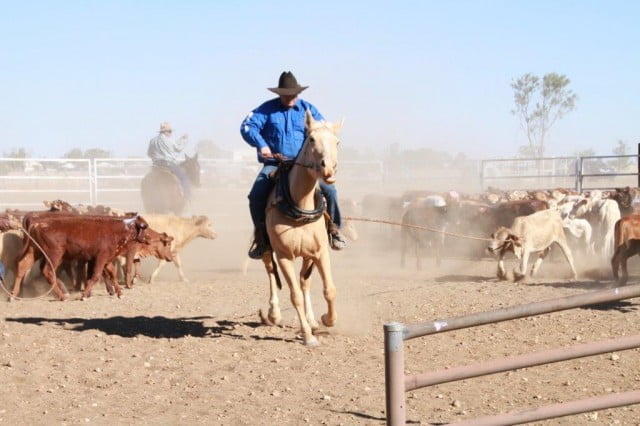 I will be taking my 84 year-old mate, legendary stockman Luke McCall back to the Drover’s Camp Festival at Camooweal, Queensland again this year. (Read about Luke McCall in Go Meet)

He likes to do it in style these days. It’s a 7000km road trip for me and takes about 3 weeks, staying in the best motels I can find and making sure he has two smokos, lunch and a fine dinner every night! His days of ‘cigarette swags’ and tea with damper are long over and he figures that he’s entitled to a little bit of comfort in  his old age.

Right across the top of Australia, old drovers are rolling their swags because it is time to head to Camooweal for their annual reunion at the Drover’s Camp Festival held every year on the 4th weekend in August. This event commemorates the droving tradition when Camooweal was the centre for the largest cattle drives the world has ever seen.

Immortalized by Slim Dusty, ‘the little border town of Camooweal’ of 300 hardy souls, slumbers west of Mt Isa on the Queensland side of the Northern Territory border in outback Australia.

It is the place where droving teams once spent the Wet season. They camped on the Common beside the Georgina River waiting for telegrams offering contracts to take delivery of cattle from stations in north-western Queensland, the Northern Territory and the Kimberley area of Western Australia. These mobs of cattle numbering 1000 to 1500 head, would be walked into railheads and fattening depots in Queensland and the south.

They were months on the road and the drovers experienced incredible privations living in ‘cigarette swags’ on a diet of beef, damper and tea and battling both stifling heat and bitter cold as storms swept down the Rankine Plain.

My old mate, Luke McCall, tells of droving trips when he was in the saddle every day for nine months as well as taking a shift on watch each night.

The droving game lasted a hundred years but when change did come in the 1960s, it came with a rush. Within a few short years the sound of motors replaced the music of horse bells. Road trains were introduced to perform the long haul of cattle to markets and meat works. The days of the pack horse drovers passed into history…… but they have not been forgotten.

A complex  has been established at Camooweal comprising an outdoor function area, a droving museum, a portrait gallery of old drovers and a camp ground where every year, more than eighty old drovers congregate to relive the days of stockwhip, saddle and spur.

What I like most of all about the Drover’s Camp Festival is meeting and being with the old drovers. They are a rare breed. Collectively they all have big hats, big bellies and bung knees. They express their individuality with the bash of their hats. They are all different and unique and are a photographer’s delight. You can easily pick out from a distance who is who by the shape of their hat.

This is just a part of the Drover’s Camp Festival. It starts on Friday afternoon in town with a street parade and a hilarious charity race. It finishes with an old-time ball.  Saturday and Sunday are packed full of action at the Drover’s Camp complex.

Activities include competition bronco branding, country music (including a big Country Music Concert under the stars on Saturday night), bush poetry recitals, art and photographic displays, along with historical displays and information and lots of Australiana books and merchandise. The local race meeting is also held over the road on Saturday.

I enjoy watching the bronco branding. This is the way calves were branded on the stations in the old days before yards were built. Mobs mustered on the run were held by ‘ringers’ (stockmen) on horseback and a ‘gun catcher’ on a sturdy bronco horse would lasso each calf and pull it up to an improvised fence panel. Three men would then leg rope it and pull it over and earmark, brand and where required, castrate it. A good team would do a calf a minute in those days. Bronco branding as a procedure has long since gone, but is now a competitive sport in North West Queensland.

The best of the best teams compete at Camooweal.

I have been attending this festival for about 7 years now and have seen it grow in size until last year, when close to 2000 people attended. The camping spots along the Georgina River are filled with campers and caravans.

Everyone is welcome. It’s a chance to meet these legendary figures and get a taste of Australia’s outback heritage.

For more information go to droverscamp.com.au

Pat McPherson is a retired nurse from Victoria. She worked as a nurse for years with the Australian Inland Mission at Fitzroy Crossing in the Western Australian Kimberley region in the 1960s and  regularly travels to the outback which she considers her ‘heart country.’