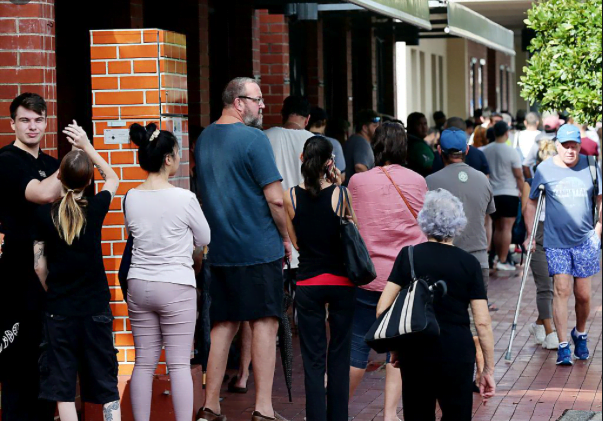 “ Through no fault of their own”. This is the phrase that Prime Minister Morrison used when he announced the new Jobseeker payment that would replace Newstart for the coming 6 months. We were told that thousands of Australians would lose their jobs “ through no fault of their own”.  And since these people could not be expected to live on the Newstart payment of $40 a day, the Jobseeker payment would be doubled to $1,100 per fortnight.

Let’s just take a closer look at the broader social issues behind this government action.

Prior to Covid19, most people receiving the unemployment payment, Newstart, were actually women aged over 50. Many had been on Newstart for years, usually until they were old enough to qualify for the pension. It’s not because they did not want to work. In fact, they were desperate for work, as they were left with little or no super or savings. Most had spent decades in the workforce in a range of professions and are highly qualified. But these women over 50 were refused jobs and locked out of the workplace by widespread ageism on the part of employers, as documented by the Human Rights Commission Report 2019.

Not once in the past did anyone in Government announce that these women were unemployed “through no fault of their own”. Quite the opposite.

For 25 years, both Liberal and Labour Governments refused to raise the rate of Newstart. Furthermore, this hard line didn’t stop with gross underpayment. There was a deliberate campaign to devalue and humiliate the people on Newstart as dole-bludgers who needed to be drug tested.

Where were the older women?

Where were the older women in this characterisation? Nowhere. They were invisible. Just as they were meant to be. Because if it were widely known that most people on Newstart were not drug addicts but respectable older women, they would not fit into the stereotype of the undeserving poor. In this narrative, the undeserving poor are characterised as social parasites. So they cannot expect to lay claim to an increased share of the budget from Government.

Compare that to the immediate rejection of placing a similar label and worth on the new wave of Covid19 unemployed. Older women on Newstart had to manage on $40 a day even if it meant not being able to afford to eat every day and sleeping in their cars. Good enough for them, but clearly unacceptable for the newly unemployed.

It’s no accident that the majority of people on Newstart are older women. It is part of a broader social problem which is based on a systemic failure to value the work of women. Through no fault of their own, hundreds of thousands of women over 50 are ageing into poverty and homelessness. They have become the fastest growing demographic becoming homeless. They are the collateral damage of our society’s institutionalised inequality, gender discrimination and ageism. They bear the consequences of a lifetime of unequal pay and disrupted advancement, unpaid and part-time work, and the devaluation of women as they age. The scale of this phenomenon is of unprecedented magnitude and severity.

Calculating the value of women’s work

It took Covid19 for people to recognise that without the unpaid, low paid or the lowly paid work of women, society could not function. Globally, 70% of health and social care workers are women. But unless clapping in the streets translates into actual monetary compensation and equal pay, it is merely a transient and insubstantial gesture.

Nothing is more telling than the fact that the unpaid labour of women is excluded from the calculation of the GDP. This strips it of recognition as having economic value and makes it invisible. This must change.

On International Women’s Day in March this year, the New York Times published an analysis estimating that if American women earned the minimum wage for the unpaid work they do around the house and caring for relatives, “they would have made $1.5 trillion last year. Globally, women would have earned $10.9 trillion.” The value of this shadow labour exceeds the combined revenue of the 50 largest companies on last year’s Fortune Global 500 list, including Walmart, Apple and Amazon.

The enduring pay gap between men and women in Australia is nothing other than the enduring perception of women as having lower value in contributing to our nation’s economic productivity. Governments spruik GDP as the best gauge of the national economic and therefore societal health. By paying women less than men for the same work and without taking into account the value of women’s unpaid work these figures are systemically distorted. And the contribution of women to the nation’s economic health is grossly undervalued.

Three things need to happen in post-Covid Australia to create a fairer and more equal society.

First: Jobseeker must remain at its present level, even though the Government has announced it will revert to the pre-Covid level.  It is not only inhumane to ‘snap back’, it is also probably impossible with 10% of the population expected to be unemployed. There are now too many ‘deserving poor’ to re-classify them as ‘undeserving poor’. Furthermore, ACTU figures show that 42% of those stood down without pay due to the impact of Covid19 are people over 65. Amongst them, thousands more older women will join the ranks of those already unemployed. The GFC showed us that when older people lose their jobs, they are unlikely ever to find re-employment.

Women can no longer accept unequal pay because this unequal monetary value inevitably handicaps women throughout their working lives and condemns them to economic insecurity as they age. Men aged between 30 and 60 have retirement savings worth 42 per cent more than women of the same age, according to research carried out last year by Women in Super.

If we continue like this, we are perpetuating new generations of women ageing into poverty.

Third: Jobseeker is not meant to be a long-term safety net. It must be transformed into a Universal Basic Income. Spain recently announced that it was introducing the UBI. Covid19 has exposed our society’s desperate need for a better social contract – one that holds the welfare of its citizens as a primary purpose and value. We cannot snap back to a broken welfare system that leaves millions below the poverty line, experiencing hunger, disadvantage and homelessness. To continue to do so will present a greater threat to our national survival than Covid19.