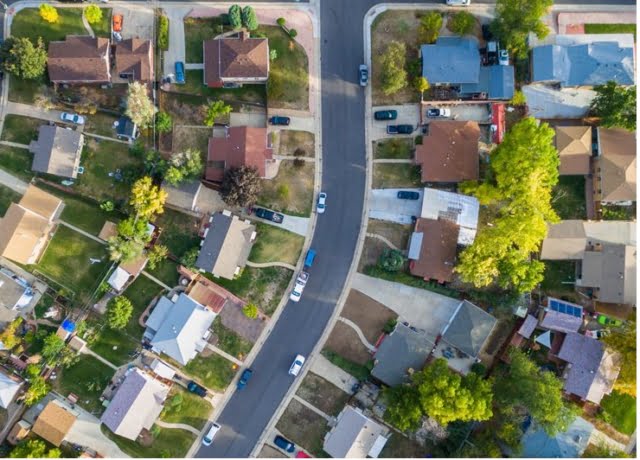 Australia is in the midst a housing affordability crisis. And now we know who to blame for it.

In the recent ABC 7.30 Report series, interviewees including economists from Deloitte, did not blame Government policies for the housing affordability crisis. They did not blame a financial and tax system that fuels skyrocketing house prices by favouring local and foreign investors, developers and speculators. Nor did they blame the failure of Government policy to address scarcity of housing including social housing. No. The real culprits it appears are older Australians still living in their homes. Their generational greed is to blame.

We were told that Australia is divided into two classes – those who own homes and those who don’t. Housing affordability was framed as an issue of “fairness” – a zero-sum game in which the advantaged, older Australians, simply by virtue of owning their homes were disadvantaging younger generations who don’t own homes. These older homeowners are generally pictured as a cohort of greedy ‘Boomers’ who have reaped the advantages of Australia’s development and are selfishly sitting on that wealth.

The Grattan Institute’s economist Brendan Coates went even further by pointing to pensions as the cause of additional inequity and as a factor contributing to the housing crisis. “The fact that you can own a $2 million house and still get the pension is probably unfair in a world when there are so many Australians who don’t own their own homes and an increasing number who won’t own their own homes in retirement,” Coates said.

Implicit in this statement is the idea that the pensioner owes it to society to either sell the house or not get the pension. Either one of these would somehow help other, younger Australians as yet unable to own their own homes acquire the means to do so. Without supplying any evidence, it also implies that all pensioners or at least a majority, live in $2 million houses.

The best first step to redress this unfairness, according to the Grattan Institute, is to no longer exclude the home in the pension assets test. They spelled this out in their submission to the Government’s Retirement Incomes Review . Coates and his co-author Jonathan Nolan recommended that the family home of pensioners be included in the pension assets test above a suggested $500,000 threshold. They proposed this measure as one of the ways the government could avoid increasing super contributions and save the government money.

However, framing the housing affordability crisis as a generational conflict distorts the reality of the housing crisis. And the proposal to include the home in the pension asset test will actually impoverish a greater number of older Australians, particularly older women, at a much faster rate. It will only accelerate homelessness. Furthermore, it would most likely force a dramatic increase in Government spending rather than reduce it.

What is clear is that if the family home were to be included in the pensions asset test, it would have the most drastic consequences for older Australians.

Median house prices in Melbourne and Sydney at the end of December 2019 were $778,649 and $973,664 respectively. In the other capital cities the medians were around $500,000 or more. This would mean that most home-owning pensioners would become disqualified for the pension as their homes most probably would be valued above the suggested threshold. Pensioners receive the pension either in full or part, because they have no or little income. So this measure would mean pensioners would be forced to sell their homes in order to survive.

The reality is that the home ownership rates amongst older people are already plummeting. Growing numbers are being forced into homelessness. Around half a million Australians aged 50 years and over lost their homes during the first decade of this 21st Century according to the Australian Housing and Urban Research Institute Report 2012.  And the numbers continue to rise.

In the past, Australians usually had paid off their mortgages by the time they retired. Now, the number of mature-age Australians taking on mortgage debt to survive and carrying mortgage debt into retirement is soaring. Average mortgage debt among older Australians has blown out by 600 per cent since the late 1980s after accounting for inflation. Nearly half of all homeowners aged 55 to 64 are still paying off a mortgage, up from just 14 per cent 30 years ago. “ These statistics are quite shocking,” said Rachel Ong ViforJ, Professor of Economics at Curtin University and lead author of the study for the Australian Housing and Urban Research Institute (AHURI).

The most vulnerable and the hardest hit are older women who have worked all their lives whether inside or outside the home. They have paid taxes but crucially, have no or little savings or superannuation, otherwise they would not be eligible for the full pension. These women also constitute the majority of people on Newstart and they are fastest growing cohort of those becoming homeless.

The Australian Housing and Urban Research Institute (AHURI) in 2012 had already raised concerns that rising mortgage debt and falling home ownership rates in later life were undermining the role of home ownership in supporting retirees’ financial wellbeing. They alerted us to a trend that is pushing more low-income older Australians into poverty.

The Grattan Institute’s submission insists “No pensioner would be forced to leave their home” if these homes were included in the assets test because in an acknowledgement that most pensioners are cash poor, they could “continue to stay at home and receive the pension under the Government’s pension loans scheme, which recovers debts only when homes are eventually sold.”

But in order to access the Pension Loans Scheme applicants must be eligible for a qualifying pension – such as the age pension – which the proposed inclusion of their homes in the asset test would most likely disqualify them from receiving.

The most likely outcome of such a move would be forcing pensioners to sell their homes.

FORCED TO SELL & GO WHERE?

What happens if our pensioner sells?

Likely she would lose the pension because the sale of her home would send her over the asset limit of $263,250 for a single homeowner on the full pension. She would have to find a new home and pay for it in full because banks will not give mortgages to the elderly unemployed. And she would also need sufficient funds left over from the sale to support herself for the rest of her life because rampant ageism in recruitment means she is unlikely to ever again find work. She would not be eligible for a pension again until most of the money realised from the sale is gone. To buy a home she could afford in these circumstances, she would probably have to seek much farther afield, a move that would entail dislocation and isolation from the social connections she has made and the services which have supported her over many years.

Many would likely have to find rental housing. New research by the OECD recently found that Australians over the age of 65 have the highest rate of rental poverty in the OECD as a result of the housing boom and an inequitable retirement system. Furthermore the situation for over 65s in the rental market is getting worse, as recorded by the ARC Centre of Excellence in Population Research (CEPAR) at UNSW.

The combined impact of these changes is expected to increase Commonwealth Rent Assistance (CRA) eligibility among seniors.

The real cost to the federal budget of rent assistance payments to older Australians is forecast to blow out from $972 million to $1.55 billion a year according to the Australian Housing and Urban Research Institute.

So removing the pension will probably increase the need for government spending on older Australians instead of reducing it as forecast by the Grattan Institute.

SO WHO BENEFITS WHEN OLDER PEOPLE SELL THEIR HOMES?

Will house prices drop to prices younger people can afford and the scarcity of affordable housing be eliminated? Not likely.

Developers and investors are the ones most likely to benefit. Older homes on bigger blocks are opportunities for developers to put up town houses or apartments they can sell for great profit, especially if the homes are located in central, established suburbs. These apartments and townhouses tend to be aimed at the higher end market with price tags to match, not at young couples with kids.

Who else benefits? The Government. Removing people from pensions is always a welcome outcome for governments, especially those committed to cutting welfare costs.  Furthermore, the politics of division – pitting society against vulnerable sectors or groups, in this case targeting pensioner homeowners, serves a very useful purpose. It distracts from the lack of Government interest in or policies for providing affordable housing.

It avoids any public pressure to change policies that benefit foreign and local investors.    Significantly, there are no calls for them to give up their houses so that younger people can afford to buy homes. Only older people are singled out.

WHAT DO WE WANT OUR COMMUNITIES TO BE LIKE?

But the policy of divide and distract works because there has been very little discussion about  the question lying at the heart of the issue – what do we want our communities to be like? This question places the home in the context of community and how we value older people in our society.

This question is rarely asked by the media and therefore most public discussion around the topic of affordable housing has unquestioningly accepted the assumption of the home as a financial product, a valuable asset without any meaningful context other than what may be realised financially. Part of the commodification of everything. But this ignores the context of community. Community is essential to our well-being as individuals and as a society, especially if we’re going to survive the challenges of rapid change. This was most recently and powerfully illustrated during the bushfires when only the resilience of communities sustained individuals in the face of catastrophic loss.

What do older people value when they speak of a home?  Research by The Australian Centre for Social Innovation found that  the value older people place on a home is not financial but “its greatest value is as a safe and private space from which to connect with the outside world, express identity and build social relationships” (Quoted in Emma Dawson & Myfan Jordan “Older and poorer: Retirement Income Review can’t ignore the changing role of home.” The Conversation, Feb 26, 2020)

This is a view that people of all generations would find compelling.

What we should be talking about is not how we drive old people out of their homes but how we plan for and build communities that connect people of different generations in housing where the value of their homes is seen primarily in terms of social cohesion and well-being rather than financial investment.  Who would benefit? Everyone.