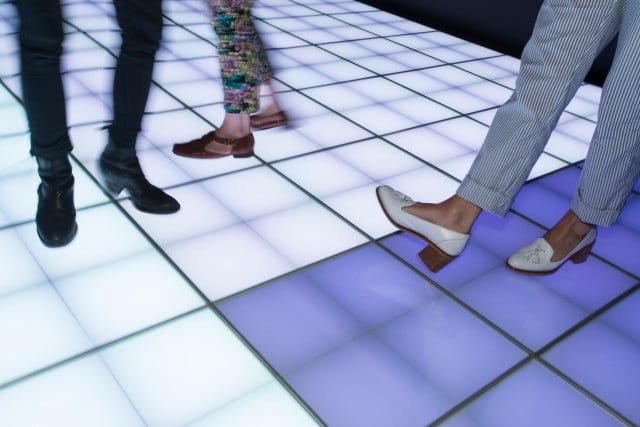 Like an Empress Dowager, the National Gallery has reigned over art in the state of Victoria for 152 years. This bluestone building, standing like a fortress behind a moat of water, has been a revered institution but also a very conservative one. Contemporary art was rarely exhibited here.

But now, in a dramatic break with the past, the Empress Dowager has flung off her ceremonial robes and put on jeans.

This is the feeling I got at the launch of the National Gallery of Victoria’s first ever massive exhibition of contemporary art, Melbourne Now. It is an explosion of colour and creativity. It features video, sound and light installations, interactive community exhibitions and artworks, and design and architectural components.

Over 400 local artists, designers and architects have individually and collectively brought a new excitement into the galleries. They are boldly and exuberantly celebrating the contemporary cultural identity of Melbourne.

This unprecedented exhibition was initiated by Tony Ellwood, the director of the NGV. He explained that “It takes as its premise the idea that a city is significantly shaped by the artists, designers, architects, choreographers, intellectuals and community groups that live and work in its midst.”  The Melbourne Now exhibition has brought this creative energy into the NGV and the effect, he said, has been “transformative.”

As you walk amongst the more than 250 works, you are able to identify and recognize so much of what it means to live in Melbourne today. There is a Design Wall with 600 everyday items such as tram handles and water coolers; icing-coated edible living and dining rooms; a large dome constructed out of plastic Ikea bins; and many other remarkable exhibits.

That could be the reason Melbourne Now has struck such a chord with both locals and tourists.

A record number of more than 100,000 people saw the exhibition in its first 2 weeks alone.

It is the perfect place to come on your own. You can come again with a friend or a group of friends. In fact, you can probably do all three as there are many opportunities to visit repeatedly and it would be near impossible to see it all in one visit. Entry is free, however often you visit.

Melbourne Now will be open until 23rd March, 2014. Note that the Ian Potter Centre in Federation Square is closed on Mondays and NGV International on St. Kilda Road is closed on Tuesdays.

Melbourne Now is not only the first major exhibition showcasing the city’s contemporary art, it is also the biggest exhibition in the gallery’s history. Spread over its two sites, NGV International on St. Kilda Road (B in map below) and NGV Australia at the Ian Potter Centre in Federation Square (A in map below), it also spills out into street art in the city’s laneways.

WomanGoingPlaces has written about the street art in Hosier Lane (http://womangoingplaces.com.au/go-touring-melbourne-street-art/ ). The project ALLYOURWALLS associated with Melbourne Now has painted over these works to allow a new group of the finest of Melbourne’s street artists a chance to exhibit.

Not only is there so much to see, but there are a great many public events scheduled over the next few months as part of the Melbourne Now exhibition. You can get information on the website http://www.ngv.vic.gov.au/melbournenow.

Go Yachting in Australia – A Great Activity For Women