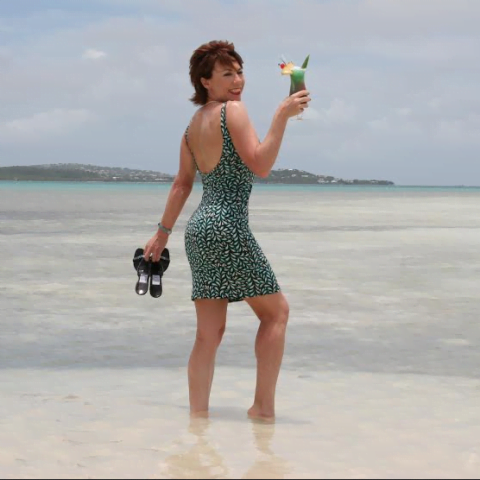 Kathy Lette epitomizes smart and sassy. Her razor sharp wit and incisive observations as a writer and commentator delight her many readers and admirers.

As a writer, her talent has been not only to amuse, but also to use humour and her ribald take on life to deal with subjects that seriously affect the lives of women. Kathy is the author of 20 books, the latest of which is best-seller ‘HRT – Husband Replacement Therapy.’  Kathy uses humour as a weapon because “poetic justice is a form of justice that is available to women — you can always impale enemies on the end of your pen.”  For example, her  novel Courting Trouble uses humour to talk about sexual violence, in particular the outrageous treatment the court system metes out to rape victims in Britain (and elsewhere).

Her brilliant career began with co-authoring the cult classic novel Puberty Blues at the age of 17. Puberty Blues was subsequently made into a film and most recently, into a successful TV mini-series. She later worked as a newspaper columnist and television sitcom writer for Columbia Pictures in Los Angeles before writing international bestsellers including Foetal Attraction, Mad Cows, which was made into a film starring Joanna Lumley and Anna Friel, Nip ‘n’ Tuck, and How to Kill Your Husband and Other Handy Household Hints, from which an opera was adapted and premiered by the Victorian Opera, Australia. In The Boy Who Fell To Earth, a novel inspired by her son Julius, Kathy created a funny and moving account of bringing up a child with Asperger syndrome. Her books have been translated into 17 languages.

Kathy writes for the print media and also appears on television in both Britain and Australia.

As a feminist and champion of women’s issues, she is also an ambassador for Women and Children First, Plan International and the White Ribbon Alliance.

The joy of living in London is its proximity to everywhere else. What with book tours and travel pieces, I’ve been lucky enough to explore everywhere from Moscow to the Maldives. (Place-dropping, a new art form!) But of course, my favourite destination is a cosy little spot which goes by the name of “G”. But obviously I can’t give too many details about who takes me there and how often! 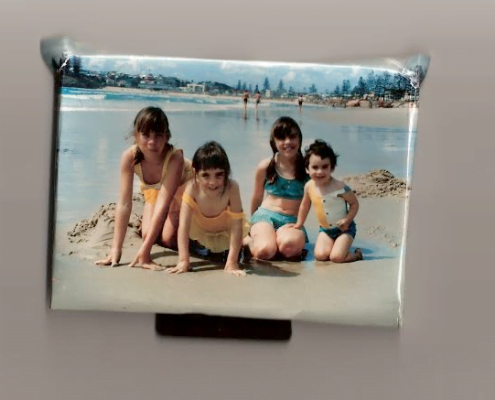 But my happiest holidays took place in my childhood , in my grandma’s beach side shack in Gerringong, a little town south of  Sydney. (Like many Australian place names, Gerringong is Aboriginal for “get lost white ratbags.”) Every school holiday my family would snake our way down the coast in our over-laden Chevy. Oh the joy we’d feel as we rounded the final bend and looked down at that sapphire blue lagoon and golden arc of sand, bookended by grassy headlands. My three sisters and I would explode from the car like champagne from a shaken bottle, squealing with delight as we raced for that beautiful beach.

As toddlers we lolled about in the lagoon, attempting to bridge the yawning chasm between us and buoyancy. Later, Dad taught us to body surf. The first time I followed my father into the swell the waves slapped my face repeatedly. I felt I was being interrogated by the Nazis. As a sheer cliff of green water reared up, (what my sisters and I called a “vomit comet”) I began to realize that “body surfing” is just a euphemism for “organ donor.” But my father simply picked me up and hurled me like a human javelin towards shore.  Before I had time to have a heart attack, I realised I was actually aloft on the crest. I kicked, arched, threw my arms in front, dug into the water and skittered down the face of the wave, whooping. It would have been a total triumph… if only my bikini bottoms hadn’t caught a different wave altogether.

At the end of each sun-drenched day, it was off to the fish and chip shop. We ate so many battered savs and pluto pups it’s a wonder Greenpeace didn’t mistake us for whales and push us back into the briny. With salt-encrusted eyebrows, we’d then play on the swings outside the pub while our parents had a leisurely pint.

Now that my sisters and I have children of our own, Gerringong is still our favourite destination. Every December for  26 years, I’ve uprooted my family and dragged them to the other side of the world, blinking like field mice as we emerge into the searing sunshine at Mascot. We then head straight down the coast. My English friends are only slightly more active than a pot plant. They get winded licking a stamp. But at Gerringong my sisters and I ride boogie boards all day, holding hand as we surf to shore like deranged Gidgets. We go rock-pooling and bush walking with the kids and eat mangos so succulent you have to be hosed down afterwards, then play charades all night. It’s hilarious, chaotic, sunburnt bliss and I wouldn’t miss it for the world 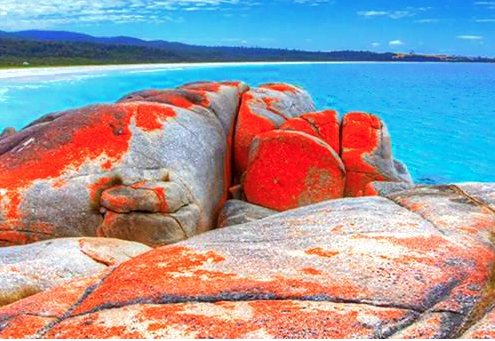 Tasmania is an ancient wilderness with unique and exotic wild life. (Errol Flynn was born here, after all.) The “Map of Tassie” is Oz slang for the female pudenda, because of its triangular shape. And if so, it’s totally unwaxed. Over 50% of Tassie is designated national park, meaning that there are  more animals than people.

Tasmania is the world’s best walking destination. There are over 1,200 miles of tracks in 18 national parks , through Jurassic Park-like forests and along pristine white beaches. Giant eucalyptus trees tower over platypuses playing in clear creeks where 10 foot tree ferns burst from a  bush teeming with pygmy possums, parakeets, quolls, wombats and wallabies.

Take the six hour hike around the Bay of Fires, named for the flint-sparked Aboriginal campfires spotted by the first Europeans to brave this isolated coastline. It’s an arduous walk, your kit on your back. As my attitude to exercise is “no pain, no pain”, I was sure I would lose the will to live by the first beach crescent (Come eco touring. Give morticians more employment!) But the Bay of Fires is so breathtakingly beautiful, I hardly noticed the distance. The wooded slopes and craggy cliffs, the lunar landscape of granite boulders, Jackson-Pollocked with orange, red and yellow lichens,  the rolling surf hissing onto your shoes, your only company the nonchalant kangaroos grazing amid the middens of oyster shells, discarded through thousands of years of Aboriginal feasts  – you begin to think Homo sapiens the endangered species. 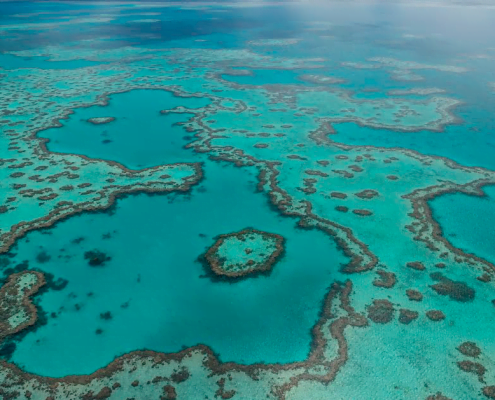 Queensland’s Whitsunday Passage was named by Captain James Cook as he nosed his ship the Endeavour through it’s azure waters and coral reefs on Whit Sunday 1770.

The 74 Whitsunday islands are a national park, teeming with rainbow lorikeets, cockatoos, kookaburras, kingfishers, blue tiger butterflies and rock wallabies. When you first arrive, you find yourself talking in exclamation marks. “Wow! Amazing! This whole empty silica sanded beach is really all mine?!!!!!!!!”

My only rules re sport are – nothing involving water, balls, feet leaving the earth, or sweat. My preferred activity is reading, in which there is not much potential for death. If God had meant us to swim in the ocean, he would have given us shark proof metal cages. I mean, there must be a reason fish never look truly relaxed…. Could it be because something much, much bigger is always trying to devour them? But you simply cannot come to the Great Barrier Reef and not go into the water. 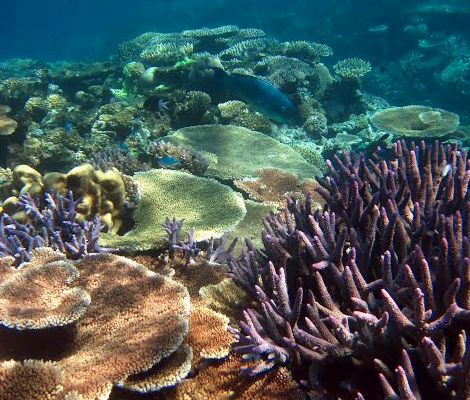 From the Whitsundays it’s only 15 minutes by boat to the Great Barrier Reef, the eighth wonder of the world. This 2,500 km coral ribbon, with its 600 atolls, islets and coral cays, 25 million years in the making and visible from outer space, is the largest living thing on the planet…besides Donald Trump’s ego. You enter a world that is hallucinogenic, kaleidoscopic, and completely enthralling, teeming as it is, with over 15,000 species of marine life.

And in the winter, it’s the perfect place to go whale watching. The sheltered Whitsunday waters are a favourite place for the humpbacks to give birth. Cruising about in a little boat, I was within patting distance of newly born calves frolicking with their barnacled parents in the briny. Heaven. 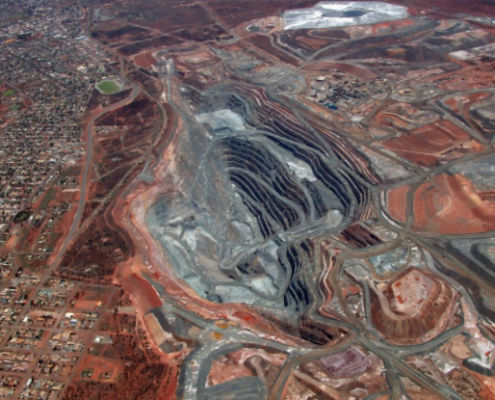 This mining town in WA is so hot the trees are positively whistling for dogs and the chooks lay hard-boiled eggs.  The “super pit” seems as vast and deep as the Grand Canyon. Gargantuan trucks, each wheel the size of a seaside bungalow,  labour, ant like, up and down the red earth slopes day in, day out. The seam of gold they mine is called “The Body” – conjuring up images  of a geological Elle McPherson, crawling with men. And, in a town with one female to every four blokes, it’s surely the women who are “sitting on a goldmine.”

But it’s full of characters and colourful stories. Make sure you visit the town’s most famous brothel,  “Langtrees” which runs family friendly “brothel tours” enabling tourists not to walk, but TIPTOE on the wild side. Although tough and rough, the town is surprisingly beautiful in many ways. The wide, expansive streets, built to accommodate a full bullock dray as it turned; the veranda-ed  pubs, fringed with iron lace….it’s Russell Drysdale, without the angst and poverty (apart from the dismal Aboriginal settlements, situated between two pits, the Super and the sewage.)  With the earth so red and sky so blue – it’s positively Dali-esque. You keep glancing around the landscape for a dripping clock on stilts. 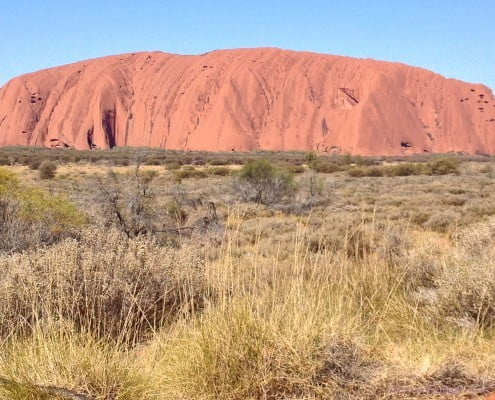 AND you must visit Uluru – Australia’s giant geological belly button smack bang in the middle of the continent.

* Never eat anything from a road-side stand.

* And the best travelling companion? Books. No matter where you are, no matter how uncomfortable, you can always slip between the covers of something scintillating. (I highly recommend my latest novel, Courting Trouble, she says, modestly. Dropping your own name, now there’s an art form!)