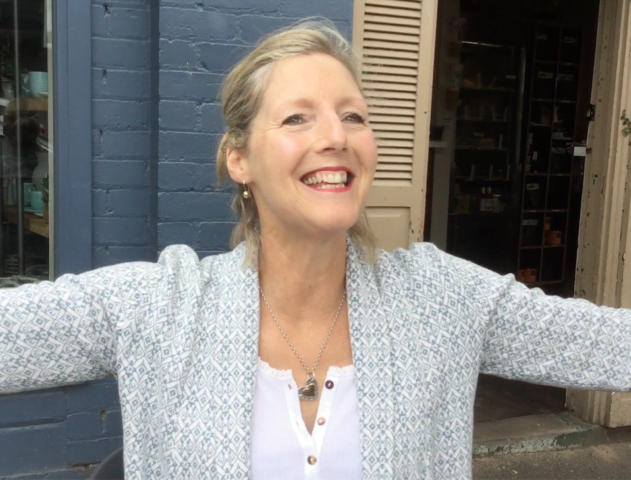 Every time we build (as part of the Tabitha Foundation Cambodia), it’s a challenge because 40 to 50 people build 40 homes in 3 days. It’s heads down, bottom up, hammer away. It’s always a physical challenge.

And what do you do?

When we go there, there’s usually a cement base that’s already poured and a frame and a roof. And we hammer floorboards. They can be bamboo or timber. And we basically hammer. One project, I think we did 3000 nails in 2 floors and also we used corrugated iron around the external walls. It has a cut out door-frame and a window, and I guess it doesn’t sound like it’s a beautiful luxury framework in which people live, but it’s dry – Cambodia has so much rain – and it’s a protection for their property and anything that’s precious. It’s a safe place for them.

I’ve been doing it for 9 years. I took my daughter last year, for her birthday, for her 21st. We went to visit Sue Huxley’s school, which was amazing. And I took my 21 year-old daughter and a friend of hers. I wanted to take them to Siem Reap because Siem Reap is one step away from heaven. That’s the temple area. It’s beautiful. That always overwhelms me because that’s so amazing. So taking Jessica last year was really important. Rather than her just being involved in the build, I just wanted her to get a sense of the country, just to understand why I just keep having to go back, why it’s just in me. It’s almost like I feel, it’s one of those places that you become so involved in it, that it’s almost hard not to go back.

It’s like watching the twin towers fall. It’s like you watch something horrific or you understand the circumstance of something and you think, I’ve seen this same picture, I’ve seen this same circumstance again and again and again. The footage just keeps coming, the environment is still there. But it’s like, do I have enough? Do I just go to bed now because I’ve already seen it? It’s like you can’t give yourself permission to step away because it’s like a responsibility. That’s how I feel. It’s a bit of a responsibility.

So that’s why I keep going back. But it’s so much fun. I love it. It’s so energising. It’s such a remarkable experience. As I said, it’s a way for me to go very safely into a country, really make a contribution. You see that. We drive through all the areas. We see all the Tabitha houses. They’re so well recognised. Each time we build, it’s usually 40 houses in a province. So maybe we do 4 houses amongst my team of 8 people. That’s a lot of houses. But there’s a lot of people that don’t have a shelter.

There’s no mucking around, let’s discuss it. It’s like: there it is, there’s the materials, the floor’s in place, start hammering! The most important thing is: where is the sun and how do we put up what walls to protect us from that beating? Because by the time you’ve been out since 8 o’clock in the morning and it’s 38 degrees and it’s 1 o’clock, wow, that heat! It’s the only place that I ever feel that complete, not dehydration, it’s different. Something happens to your body, it’s completely spent.

We had the opportunity to visit the site of a school being built in honour of one of the leaders and organisers of the build initiative Sue Huxley. I happened to go into the building to take a photo when the teacher came in. She had probably 60 or 70 students with her and they all walked in. I was sort of stuck in the middle of the room thinking “Ok, might be time for me to go now,” I was disturbing them by being in their space. So I was saying “Excuse me, I’m sorry I’m in your little space,” and she said “No, no, no.” And they started to sing. And all of my colleagues in the build team were outside the frame of the building looking in, and I was just in the middle of these amazing children singing, singing, singing. And that was a really overwhelming experience. I felt like a giant as I’m so long-limbed. And they were so open-faced and everyone participating, just singing their little hearts out. I felt like Maria out of The Sound of Music.

And oh, this Cambodian man, came out of the lush undergrowth and he looked like a warrior, bare-chested, strong, physically strong, I mean, these are people who work hard and he just looked like a warrior. And he had something (in his hand) like a spear or utensil he must have been working the ground with.  He obviously couldn’t speak English but his eyes were wide and white and he gathered the children up. We thought wow, that’s amazing and our interpreter got out of the van and went and spoke with him. And he sort of then settled down. And when the interpreter came back to the van he said that these people were targeted, the children were going missing because there were people coming from Phnom Penh to take children, for them to be taken back to the city to be prostituted. So that is an issue too, if you’re living in isolation, that’s what can happen. Children walk long distances to get water, or they walk between villages. So they have an unsupervised period of time. And that was very frightening, and obviously for that gentleman as well. And he had never seen people with white skin, so we’re talking a remote area.

For me, my travel is always to have an experience, to immerse myself in a culture, to understand the history. And I hope that makes me a more interesting person. That’s what I’m hoping.