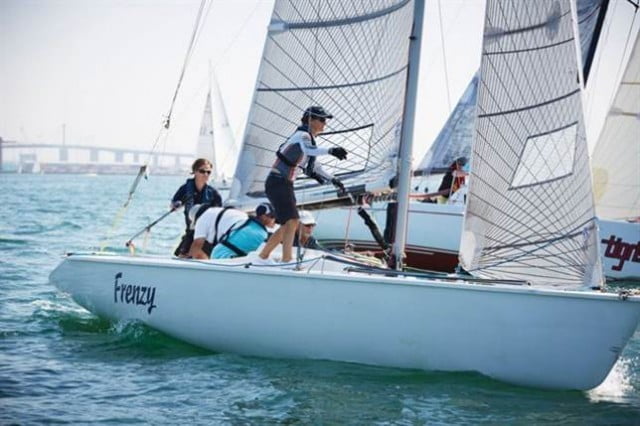 You’ve always wanted to go yachting but you don’t have a boat or a friend with a yacht. Here’s what you can do.

For $20 or less, you can become a temporary member of yachting and sailing cubs all around Australia. This enables you to go out on a boat as part of its crew.

In Victoria alone, there are 89 clubs and about 400 clubs overall in Australia. Many offer one or even two days a week that you can go out for a sail. So there are opportunities for sailing in different parts of the country.

I phoned the Royal Melbourne Yacht Squadron in St. Kilda, Melbourne, and asked if I could take part in a sail. I was told to come along that afternoon, pay a fee of $20, and I would be assigned to a boat.

I knew nothing about sailing, but this was not a problem at all. Because it is entirely up to you whether you just want to sit back and enjoy the sail, or whether you want to have a more hands-on experience. Either way, the clubs, boat owners and crews are very welcoming.

And that’s how I came to take part in my first ever yacht race, a Twilight Sprint which began at dusk and ended at sunset on the waters of Port Phillip Bay.

I was on a 57′ S&S Swan yacht called the White Swan. And because we were in what is called a ‘pursuit’ race, White Swan was handicapped to start last because of her speed and size.

There was another guest on the boat. Diana had just completed her first sailing course because she thought it would be  a great idea to be able to sail to different countries when she retires.

Skipper of the day, Lee Maddison steered us out of the St. Kilda Marina into the bay. As we got into position for the start of the race, the skyline of Melbourne’s city centre rose up on our right. The gold cap on the striking Eureka Tower caught the fading sunlight and became a glittering beacon.

We set off and the crew went into frantic motion. Letting down sails, hoisting up sails, letting out ropes and winding them in. On a boat, ropes are called sheets – a whole new vocabulary. The excitement rose even higher as we began tacking or jibing, that is, quickly switching the position and tautness of the sails in order to make the most of the wind and trap its power to propel the sails.

As you do this, all crew members have to swiftly move from one side of the boat to the other to help balance the boat. You have to remember to duck as the boom swings from side to side.

At times, it was like being on a sea-borne roller coaster as the boat rose precipitously out of the water. And then suddenly, we were skimming along at an angle of almost 45 degrees. That was when I decided to stow my camera away and hang on with both hands.

Acting Skipper Lee maneuvered us very capably through it all, rapidly catching up on the other boats and flying past the markers.

White Swan finished in second place, even though we had started the race 25 minutes after the first boat began.

And I had an exhilarating, wonderful sail. Take a look at the video I took of the yacht race.

An additional benefit to signing up as a temporary member is that it entitles you to have dinner in the Royal Melbourne Yacht Club’s Members’ Dining Room. So after the sail, relax and join the crews for drinks and dinner overlooking the marina and the city lights.

Increasing numbers of women are taking up sailing. Yachting Victoria is now taking the initiative to increase the number of women taking part in sailing and to promote as many woman-friendly clubs as possible. They have set up a website www.womenandgirlsinsailing.com.au . Contact them to find out what’s available. You can decide on your level of involvement – a day trip or sailing courses, club membership, joining teams and racing. You can also search the internet for yachting and sailing clubs and call them to find out what they offer.

Videography and editing by Augustine Zycher

See our Noticeboard for more contacts both Australia-wide and in Victoria that will give you information about how to begin sailing at the various yacht clubs around Australia.