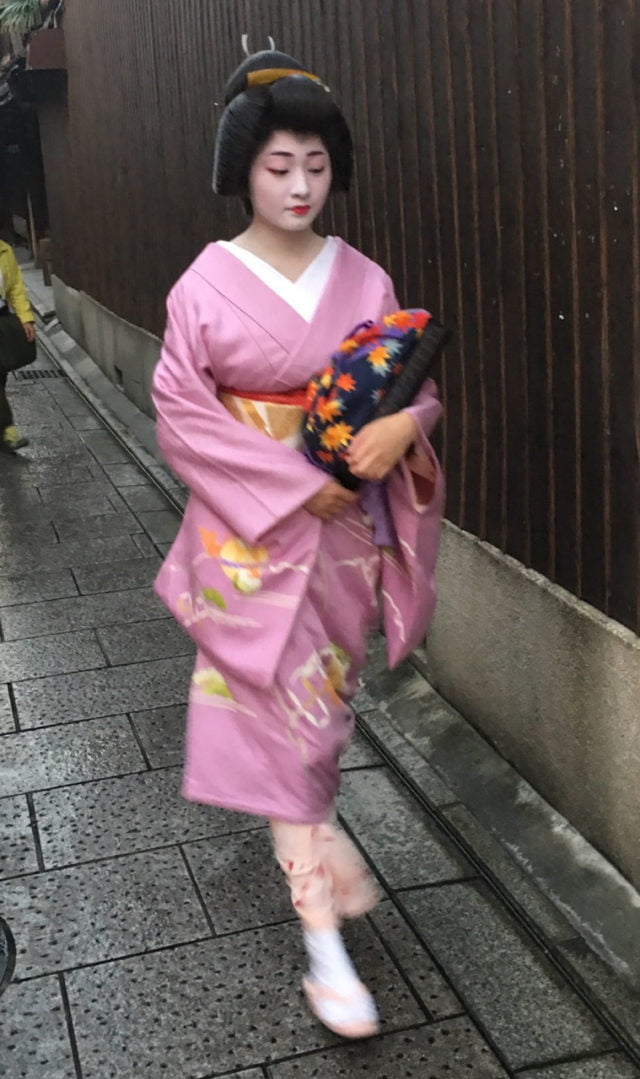 Kyoto is  the centre of Japan’s Geisha culture. There are almost 200 Geiko, popularly known as a Geisha, in Kyoto, making it the largest concentration in Japan. Geisha in Japan are respected artists.

They reside mainly in the charming Gion quarter, with its leafy narrow lanes lined with traditional wooden houses. It is located around Shijo Avenue between Yasaka Shrine in the east and the Kamo River in the west.

It is here that girls and young women receive the rigorous training to a become a Geiko, and here that they entertain in Ochaya, the traditional tea houses.

You may be fortunate, as we were, to see an exquisitely costumed Geiko walking along the narrow streets in the Gion district. If you do see a Geiko, which is not a common sight, it is considered very impolite to approach or try to speak with her.

However, we were able to spend more time with a Maiko – a young woman serving an apprenticeship in order to become a Geiko.

Meeting a Maiko in Gion was one of the most memorable events of our time in Japan. We met her in the wooden Ochaya. It was a delight to see her serve tea and then to watch her dance. She then answered our many questions about Maiko and Geiko through an interpreter.

It is necessary to explain that contrary to popular belief, Maiko and Geiko are not sex workers. They are respected artists who undergo a course of 5 years apprenticeship in singing, dancing, playing instruments, calligraphy and traditional Japanese skills such as tea ceremonies before they are allowed to qualify. They are highly accomplished performers and social hostesses who are invaluable to the smooth and successful running of business or social gatherings.

Nor can you simply book a Geiko to hostess or entertain at a function. They entertain only for guests known to their mother house who have been clients of at least three generations standing. New clients may be accepted only on recommendations from existing clients.

It is hard to find a Western equivalent for this exclusive profession. It combines the rigorous training and discipline of an elite ballet school and music academy, with the self-renunciation of a nunnery.

The community of Geiko and Maiko residing in Gion is governed by the strictest and perhaps the most conservative rules of all. This unique art form developed over the generations is fading as fewer girls are prepared to undertake the arduous training and lifestyle.

Few are accepted for training as a Maiko, and even fewer qualify as a Geiko after 5 years.

A Maiko lives under the auspices of a Kami-san (Mother of the House) who is responsible for her training and accommodation. The House Mother also takes on a parenting role. The 18 year-old young woman we met chose to become a Maiko when she was 15. This meant that she not only left school at that age, but she also had to leave her family to come to Kyoto. She is only permitted to see her family a few times a year. 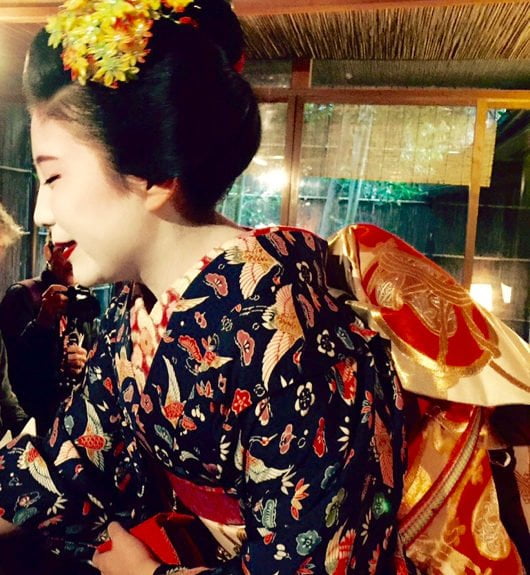 Each day, from morning until late afternoon, she receives instruction from teachers in singing, playing instruments, dancing and traditional Japanese arts including learning how to apply the striking makeup. Then from early evening until late at night she hosts guests in the traditional teahouses or at private functions. She dances and sings, accompanying herself with a range of Japanese musical instruments, pours tea and engages them in conversation.

She wears gorgeous kimonos and her hair is impeccably swept up in the distinctive, glossy traditional style. Since it is so difficult and time-consuming to arrange this style, her hair is washed, styled and set once a week. To maintain it in place, she, like all the other Maiko and Geiko, have to sleep with their necks on hard wooden little platforms.

During the 5-year training period she receives no pay for her work and studies. All her expenses are paid for by the Kami-san. If she wants to leave, she has to pay back all the expenses to the Kami-san.

If she wants to marry, she is not allowed to remain in the profession.

Remarkably, a Geiko’s skills and accomplishments as an artist, performer, conversationalist and hostess can survive the loss of her looks and her youth. There are even some Geiko in their 80’s still hosting guests.

It has recently become possible to meet a Maiko as we did, through a tour company, through the internet or a local travel guide could arrange it.

Kyoto’s Gion Kobu Geisha community puts on annual public shows which provide a rare opportunity for the public to see the geisha perform their arts. The most famous of these performances is the Miyako Odori  in which Geiko give several hour-long highly stylised dance performances each day for about 3 weeks in April.  See the official site Miyako Odori  to book tickets.

Feature image of Geiko in Kyoto Japan by June Simpson

Esther aged 107 and Norma – Women of Oz
Scroll to top