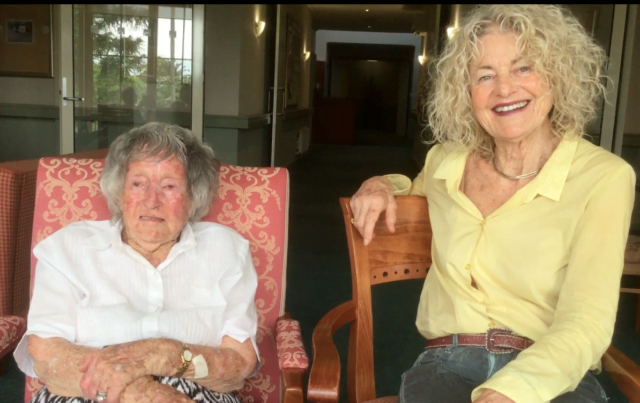 WomanGoingPlaces interviewed Esther, aged 107, with her daughter Norma. Esther has lived in an aged care facility since she was 102. Prior to that she lived independently. Throughout her long life, she travelled extensively in Australia, especially in the family caravan, with her late husband and her daughters. These trips were a joyful and an important part of Esther’s family life. She and Norma share some of these memories.

Esther:  Oh yeah there was always picnics.The picnics? We use to go in a horse and cart. That I remember. (See photo below)

Rosalie:  Did it take long? You were in Elwood at that point?

Esther: I don’t remember where we were living then.

Augustine: How long did it take you to get to the beach in a horse and cart?

Esther: Haha, a long time. Then I think we all must of had a little swim.

Norma: Do you remember the bathers that you use to wear? That the men use to wear, from the neck to knees?

Esther: Oh yes, and the ladies.

Augustine: What sort of bathers did you wear?

Augustine: Did you enjoy being on the road?

Esther: Yes, it wasn’t what it is now.  There were no idiots or drunks or drugs or anything like that.

Norma: We could pull up and camp anywhere and nobody worried, and you weren’t worried about being robbed or anything.

Esther: We camped one year I remember it was getting late, this was when the girls were with me in a caravan. I said “look we better go in here, its getting dark.” It was dark and we didn’t know where we were. We were at a cemetery. Do you remember that?

Norma: I do remember, Dad always said you never know where you might wake up. It might be somewhere wonderful.  It’s an adventure.

Esther: In a cemetery. That didn’t worry us.

Norma: And you had a very good philosophy about it, and I do it now with my children and my grandchildren I tell them the same thing. When we got lost, remember what we use to say? You’d say “Oh it doesn’t matter. It’s just an adventure. Who knows where we’ll turn up?”

Augustine: What holidays did you take when you were married?

Esther: You want to know how I met my husband? Back then it use to be a Jewish dance every Sunday night. And this particular one I was in was a . . . what sort of a dance was it?

Esther: And if you just got tapped on the shoulder they had to exchange partners. They just tapped you. Well actually they tap the man, so he had to go. And so that began our romance.

Augustine: How long were you married? 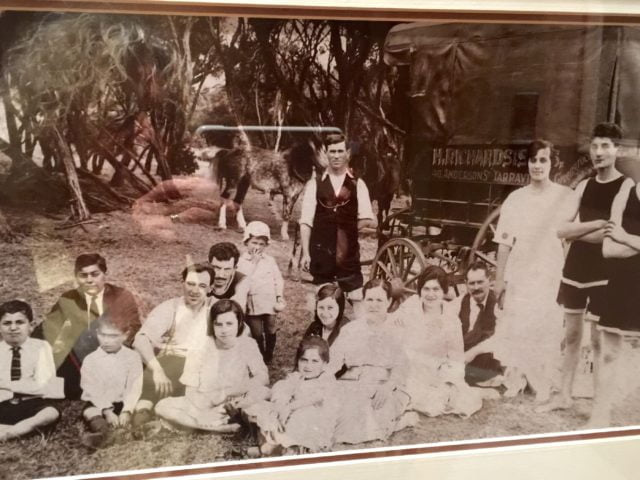 Augustine: Do you remember any other holidays, or trips or outings that you had when you were growing up, or when you were married?

Esther: Oh, when we were married we went to many places. Especially school holidays. We had a caravan and we went here, there and everywhere.

Norma: Remember when we woke up in the morning and what we saw way out in the sea? Whales! Dad said we’re lucky if we see whales and sure enough we woke up to this beautiful blue sea just beneath us, under the cliff and there were the whales. But the whale station wasn’t so nice, do you remember that? It stank to high heaven.

Augustine: And how did you eat on the trips? Did you have a barbecue? Did you stop at places? How did you feed the family?

Esther: Oh yes, yes. He made it into a barbecue and grilled the chops on the top.

Norma: It was one of these um, an old kerosene tin. It was about that big and he cut a hole at the bottom, for the draft. And he made his own, he did his own wrought iron stuff. During the war he worked on aircraft or something. And um, he was pulled out of school because his Dad had a heart attack and he had to run the family business.

Esther: When he was about 16

Norma: And he had spent about 4 years in bed because of a congenital hip deformity so he didn’t have a lot of formal education but he was, he really thought outside of the square. But he made this sort of a grill thing that you put on top and we had the best barbecues. He’d put the potatoes in the, remember the ashes at the bottom wrapped in foil, the fish. He cooked the fish there and the toast, But mostly we had …

Esther: I remember the toast yeah.

Norma: …But mostly you cooked a bit in the caravan. But tell them about the other holidays we had. We had three different sorts of holidays, all wonderful. One was a camping trip, one school holidays. The other school holidays Dad gave you a break and what did we do? We went to the guest houses, Marysville and places like that.

Yeah, there was Sherbrooke and Marysville. Each year we would do a camping trip and then Dad would say Mum needs a break, we’ll have a guest house holiday. Then the long summer holidays and every weekend, which is where we’re both keeping the skin doctors in business, was um in the family holiday house in Edithvale. But Mum said I don’t want that big house and garage. We’ll have the garage thank you, where they use to keep the horse and cart. And Dad made it into kind of a bungalow thing. And we had a boat shed and boat, so we spent our entire summer down at the beach, from breakfast till sunset, didn’t we?

Esther: Oh we had the boat shed which was very convenient to sit on the beach and watch. Just sitting in the boat shed when it was too hot, you have your swim and come out and . . .

Esther: Fishing? From my late husband. He enjoyed it.

Norma: Because of his hip abnormality … he was a real outdoors man wasn’t he? He couldn’t run so he took to the water. But they spent their life, we all spent our lives on Port Phillip Bay, and then the various rivers and oceans around and up the east coast.

Esther: We camped on the river…Yes, it was the Murray. Oh and someone had left all their gear there for fishing which was very convenient for us. So he fixed it all, threw it in the water to catch a Murray cod. Well it started to rain cats and dogs so we had to leave it. We came back in the morning, the first thing he wants to see if he caught anything- Yes it was a set line, and “oh” he says “I think I got a horse on the reel.” He pulled it out and it was a Murray cod, forty-…

Esther: It was this big.

Norma: No, it was this big, they could barely carry it. And then how was it cut up?

Esther: It was put into a butcher’s refrigerator. He obliged us. And when we came back, the meat was still frozen. My late husband’s brother was a doctor and we invited him to come over and come and do something with the fish. He operated on the fish, cut it all up and of course the whole family got…

Norma: …And all the neighbours and all the cousins and everyone we knew. And all their freezers were full.

Esther: And nowadays, I don’t think you’re allowed to take them out of the sea.

Norma: You’re probably not allowed to have set lines either.

Esther: No, you wouldn’t have set lines now.

Augustine: Why do you love the beach so much Esther?

Esther: Oh… I don’t know. I wasn’t use to it before I met my husband. I remember him, where he bought a boat and he use to fish in it and I wouldn’t go on it. And he said “Oh come on, it’s flat, very flat and calm and when you want to stop and want to come in I’ll stop and take you in.” Well it was such a perfect day, that was the beginning, I didn’t want to go in.

Norma: And then Mum use to drive the boat when Dad water-skied. Mum only learned to drive at about what? Your mid twenties? But then she was driving the speed boat all over Port Phillip Bay well into her late seventies.

Esther: And now you’ve got to have licences and…

Augustine: You mean you drove a speed boat around Port Phillip Bay without a licence?

Norma:  No, but you didn’t have to have one then.

Esther: No you didn’t have to have a licence.

Norma: Mum’s a very good pennant bowler. How old were you Mum when you stopped bowling?

Esther: Oh, ah, I’ve been an outdoor person all my life. I started when I was a teenager, playing basketball then I switched to tennis and then I . . . where did I go after tennis? Maybe there’s more in-between there. Anyway I played tennis till I was in my eighties and I couldn’t see the ball quick enough to hit, return it. So one of the girls said, who was a bowler also, said why don’t you come and play bowls and give it a try. Which I did, which I enjoyed very much. I played bowls until I was ninety-eight. Yeah, ninety-eight I played bowls. When I was ninety-two I bought a new car and they said “Oh, I’ve never sold a car to a ninety-two year old.”

Augustine: I read in the article that you said the secret is just to keep going.

Norma: And forget your age.

Esther: And forget your age.

Augustine: And how do you deal with all the ups and downs in life and all the stress and all the worry.

Esther: Oh, you try not to think about it.