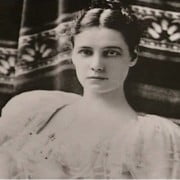 It is the 125th Anniversary of the Race Around The World.

Who was the first person to race around the world in 80 days?

14 November 2014 marks exactly 125 years since they set out on this record-breaking race.

In 1889, they covered 28,000 miles from New York back to New York, travelling by steamship, train, sampan, rickshaw, horse and burro over 4 seas and across 2 continents, an extraordinary feat in the age before aeroplanes.

The global race of these two women made international headlines and captured the imagination of peoples everywhere. But since then, their feat has faded into obscurity.

WomanGoingPlaces would like to recount the remarkable story of Nellie Bly and Elizabeth Bisland – two women who had the courage to go places in every sense.

Women in journalism in the 1800s

Women did not have the right to vote when Elizabeth Jane Cochran adopted the pseudonym Nellie Bly, and began working as a reporter. Not only were there few women in journalism at that time, but she also pioneered what later became known as investigative journalism by going under cover and risking her life to expose important social issues.

She came from Pennsylvania coal country and talked herself into a job at ‘The World’ in New York under its renown publisher Joseph Pulitzer. She soon showed her courageous and intrepid spirit by persuading her paper to let her feign mental illness and be locked up in insane asylum. Her exposé of the cruelty in the asylum prompted a reform of the institution. Nellie also arranged to be thrown into prison so she could expose the treatment of female inmates; worked in a factory to reveal the shocking conditions of working women; placed herself in great danger in order to lead to the arrest of a sexual predator; and bought a baby to uncover the trafficking of babies in New York. The irony is that today she would most probably have been awarded one of the Pulitzer Prizes, named after her employer. But in the 1880s, she gained more recognition for her travels than for her journalism.

Elizabeth Bisland came from the South. Like Nellie Bly she had come to New York almost penniless and talked herself into a newspaper job. All the money she earned had been through her writing.

Both women struggled to carve out their positions as writers  at a time when journalism was almost exclusively, a male domain.

Unlike Bly’s exposés of social injustice, Bisland’s focus was on literature. She became the literary editor of The Cosmopolitan, a monthly magazine, and wrote essays, reviews, feature articles and poetry.

Nellie read Jules Verne’s description of an imaginary trip around the world in 80 days. It made a profound impression. It sparked her decision to take on the challenge and record her own story, an experience she hoped would outshine Verne’s fiction. She also determined to do it in 75 days.

However, when she raised the idea with her editors, they dismissed it for two reasons. They told her it was unthinkable that a woman should travel around the world alone without a chaperone. And second, that as a woman, she would need so many trunks to accommodate all her finery, speed would be impossible.

But a year later, fearful that other newspapers might take up the challenge, they called the 25 year-old Nellie Bly into the office and told her to start a race against the clock around the world  – in two days time.

Elizabeth Bisland was given even less notice. Having read about Nellie’s upcoming trip in the morning paper, the editor of the Cosmopolitan magazine called the 28 year-old Elizabeth into his office and asked her to leave that evening to beat another young woman in a race around the world.

Nellie dashed home to assemble her clothing and luggage. She chose to go around the world in only one dress – a two-piece blue suit with a long skirt, a plaid coat and a cheeky cap, of the same style that years later would be adopted by the Sherlock Holmes character.  She would carry a single small leather bag that contained everything from personal items to writing materials.

Bly developed the concept of ‘carry-on’ luggage a century before it became common. With her extremely tight schedule, she didn’t want to be delayed – miss a boat or train – by waiting for her luggage.  “ If one is traveling simply for the sake of travelling and not for the purpose of impressing fellow travellers, the problem of baggage becomes a very simple one, ”  she remarked.

Bly’s photo in this outfit became an iconic image – splashed on front pages of newspapers and illustrated on posters around the world.

Elizabeth had only 6 hours to organise herself. She took 2 dresses, a winter coat, a Gladstone bag and a steamer trunk for the rest of her belongings that would not fit into the carry bag.

And they are off….

On November 14th 1889, Nellie Bly stepped aboard a passenger ship in New Jersey and the official timekeeper started the clock as her ship steamed east across the Atlantic to England.

Totally unbeknownst to Bly, eight and a half hours later, Elizabeth Bisland stepped aboard a train and began her journey in the opposite direction.

She took the train overland to the west coast of America and then a steamship across the Pacific to Japan.

They crossed through all four seasons around the globe and travelled on seas made treacherous by storms, typhoons, icebergs, and the loss of a ship’s propeller.

Bly travelled nearly 16,000 miles on sea and was not seasick once. Bisland was not as fortunate. Their frantic schedules left them little time to enjoy the places they rushed through, but wherever possible they would try to snatch a glimpse.

Bly however, made a deliberate departure from her route by insisting on visiting Jules Verne in Amiens, France. The writer who had envisioned this adventure, was quite patronising to the young woman who sought him out and thought her too slim, frail and unattractive to break his imagined 80-day record.

Wherever possible, Bly and Bisland would send through their reports of their travels by telegraph. But Bly was not made aware until about halfway through her journey that there was another young woman racing her in the opposite direction. Nor was she aware that her newspaper was running a competition which tens of thousands of readers entered and that sold out editions, to guess the precise time of her arrival back in New York. The World made a packet with the boost to its circulation. Bly received no monetary reward whatsoever.

More than 10,000 people were at the train station in Jersey City to give her a tumultuous welcome and her success was hailed in American and European newspapers.

But there were no crowds to meet Bisland when she returned after 76 days, 16 hours and 48 minutes. Storms in the North Atlantic had cost her an extra 4 and a half days and consigned her arrival to the back pages of the newspapers.

Both Bly and Bisland then faded from public memory despite their record-breaking feat.

And it was only a hundred years later, in1998, that Nellie Bly was inducted into the American National Women’s Hall of Fame for her pioneering work as an investigative reporter. 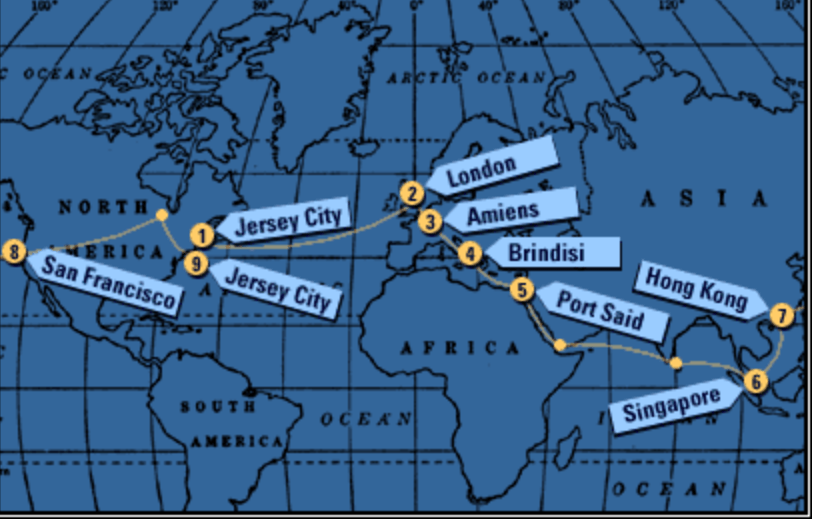